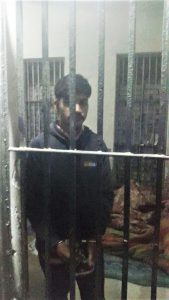 LAHORE, Pakistan (Morning Star News) – A young Christian in Pakistan has spent more than four years in jail on a false blasphemy charge as courts have delayed processes due to Islamist bias and discrimination against him, his attorney said.

Patras Masih was 18 years old when he was accused in February 2018 of sharing a photo posted on Facebook deemed insulting to Muhammad, the prophet of Islam, triggering protests by Islamic extremist group Tehreek-e-Labbaik Ya Rasool Allah, now known as Tehreek-e-Labbaik Pakistan. The protests sent hundreds of Christian families fleeing from their homes in the Shahdara Town area of Lahore.

“There’s a clear hatred toward Patras that I fail to comprehend – the courts simply don’t want to hear his case because of the involvement of the Tehreek-e-Labbaik Pakistan,” his attorney, Aneeqa Maria of The Voice Society, told Morning Star News.

She said the prejudice and discrimination Masih and his defense team have faced from trial and superior courts is “unprecedented” in her career. In the last four years her team has filed five bail petitions in the Lahore High Court, including one last month, and one in the Supreme Court, without success.

“I was extremely disappointed when the Lahore High Court flatly refused to give bail to Patras last month,” Maria said. “The judge refused to listen to my argument and outright directed me to approach the Supreme Court. Despite the threats, humiliation and insults we have faced in the courts in Patras’ case, we are still hoping and praying that Patras’ case is taken up by some unprejudiced judge of the Supreme Court.”

She said trial and appellate courts were treating Masih unfairly despite the accusations being “nothing but a pack of lies with no evidence whatsoever.”

“From the beginning of the case, the trial court has shown bias and discrimination towards Patras,” Maria told Morning Star News.

Both the high court and Supreme Court denied bail in spite of the lack of evidence in the case and ignored the statutory grounds for granting it – Section 497 of the Criminal Procedure Code stipulates if a trial has not concluded within two years and the delay is not due to the accused, bail may be granted.

The trial court not only declined all applications for bail but presented a false report when the Lahore High Court ordered it to explain the delays, she said.

“In the report, the trial court blamed us for causing delay, whereas its own record and orders show that our legal team was present in each hearing to cross-examine the prosecution witnesses, but they did not show up,” Maria said.

Appellate courts ordered the trial court to expedite the proceedings, but those directions fell on deaf ears, and the case is being transferred from one judge to another, she said.

Agonizing Fight
A day after his arrest, police handed Masih into the custody of the Federal Investigation Agency (FIA) on Feb. 19, the start of an agonizing fight for justice.

During interrogation on Feb. 23, Masih allegedly named his cousin, Sajid Masih, as sharing the alleged blasphemous post with him. When Sajid Masih promptly arrived at the FIA office in Lahore for investigation, the investigating officer and his staff tortured him and tried to force him to sodomize Patras, according to a video statement recorded by Sajid Masih’s attorney.

To avoid this demand, Sajid Masih jumped from the FIA building and suffered multiple fractures, according to the statement recorded from his hospital bed.

In spite of his recorded statement, FIA officials were never investigated; instead, officials registered a case of attempted suicide against the injured Christian.

Patras Masih was charged under Section 295-C, blasphemy against Muhammad, even though the alleged blasphemous photo shows only a human foot stepping on an unknown mosque’s dome. Courts in Pakistan commonly deny appeals for bail for those accused of blasphemy under Section 295-C, which mandates the death sentence upon conviction. In a first for the Supreme Court, on Jan. 5 it granted bail to a Christian accused of blasphemy, Nadeem Samson, incarcerated since 2017.

Maria said Samson’s case has given them some hope for justice for Patras Masih. The Voice Society has engaged attorney Saif Ul Malook to file a bail petition in the Supreme Court for Patras Masih’s release. Malook has previously won freedom for Pakistan’s most high-profile blasphemy convict, Aasiya Noreen (better known as Asia Bibi) and several other accused Christians.

Maria said the TLP and the Muslim extremist Khatam-e-Nabuwwat Lawyers Forum have exerted pressure in courtrooms to deny bail for Patras Masih.

“Advocate Malook has successfully defended many blasphemy law victims and knows well how to handle such stress, so we are now hopeful of a positive outcome for Patras,” she said.

At least 1,949 people were subjected to false accusations of blasphemy, prolonged trials and displacement between 1985 and December 2021, according to the Centre for Social Justice (CSJ). At least 84 people were killed after being suspected or accused under blasphemy laws since their promulgation as part of former military ruler Ziaul Haq’s Islamization during the 1980s, according to the CSJ.

Pakistan ranked eighth on Open Doors’ 2022 World Watch List of the 50 countries where it is most difficult to be a Christian. The country had the second-highest number of Christians killed for their faith, behind Nigeria, with 620 slain during the reporting period from Oct. 1, 2020 to Sept. 30, 2021. Pakistan had the fourth-highest number of churches attacked or closed, with 183, and overall.