Attack on Church in Southwest Nigeria Remains a Mystery

ABUJA, Nigeria (Morning Star News) – Nearly a month after an attack on a Catholic church in southwestern Nigeria, the number killed and the identity of the assailants remain unclear, though the church held a funeral service for “over 40” victims. 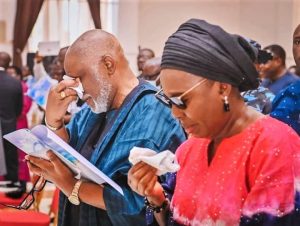 The June 5 bomb and gun attack at the end of Mass at St. Francis Xavier Catholic Church in Owo, in normally quiet Ondo state, shocked the city as it did the country. A visiting speaker from western Nigeria’s Oyo state, the Most Rev. Emmanuel Adetoyese Badejo, bishop of the Catholic Diocese of Oyo, said at a June 17 funeral service in Owo that “over 40 of our departed people” were killed, while ABC News cited an unnamed source as saying there were 82 bodies from the attack taken to a local morgue.

A lawmaker representing Owo Constituency I, Oluwole Ogunmolasuyi, who visited the site shortly after the attack, reportedly said at least 70 people were killed and injured, while the state government said 40 were killed and 87 wounded.

A priest at the church, the Rev. Andrew Abayomi, told Morning Star News that as worship service was coming to an end, the terrorists threw explosive devices on the church building and shot at worshippers. A spokesman for the Nigeria Police Force’s command in Ondo state said that some of the gunmen were disguised as members of the congregation and opened fire inside the church building, while terrorists outside fired at worshippers as they fled. 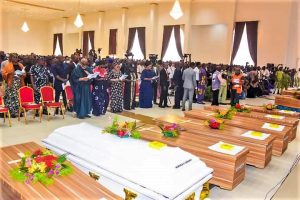 Police reportedly recovered three undetonated improvised explosive devices (IEDs) from the scene along with fragments of detonated IEDs and pellets of spent AK-47 ammunition, according to the spokesman.

Bishop Badejo said at the funeral service that few of the tragic killings that have overtaken Nigeria in recent years could compare with “the brutality and gruesomeness of the event on that Pentecost Sunday.”

“No doubt we all gather today in deep sorrow and mourning for this funeral Mass of over 40 of our departed people who were brutally murdered, mindlessly massacred,” Badejo said. “As our deceased brothers and sisters lay here, there are almost 75 others who sustained different degrees of injuries in the same incident.”

The dead ranged in age from 85-year-old, Bridget Ozulumba to children like 2-year-old Chukwuemeka Emmanuel Njoku and Mathilda Ogungbade, 3, he said.

“None of the dead or injured did anything wrong except that they came to worship God at the foot of the cross and altar on that day,” Badejo said. “There, sudden death was inflicted upon them and deep sorrow upon their dear ones left behind.”

He appealed to those present to refuse to be crushed but have hope because of their faith in Christ.

“Today, difficult though it is, let us choose more to give thanks to God that He gave our departed brethren the life, the faith and the privilege of belonging to Him and of returning to Him, even in this incomprehensible manner,” he said. “I would still understand it if someone here would say to me, ‘Preacher man, come on, you don’t feel the anger I feel, you don’t know the pain I feel’… Yet we still find consolation.”

Badejo cited King David agonizing in tears in the Psalms even as he maintained hope, and Martha in the Gospel of John maintaining hope in the resurrection.

“So, my dear people, the summit and summary of all our sentiments today is our surrender to Jesus Christ on Whom we keep our gaze as the Author and finisher of our faith. We see Him at the Stations of the Cross. We see him in His persecution, suffering and murder.”

To surrender to Christ is not to succumb to evil, he said.

“On this kind of occasion it is opportune to ask: ‘How many more must die before the senseless killings in Nigeria stop?’ In these coffins a part of Nigeria lies dead too,” he said. “Our Christian faith, strong as it is, is thoroughly tested when we remember that the massacre in Owo is not an isolated case in our country, and that we see little on the ground to indicate that it might be the last.”

He cited a report from SB Morgen Intelligence, a Nigeria-based research firm, stating that nearly 900 Nigerians were killed in violent attacks in the first quarter of this year alone.

“Even as I speak, many priests and citizens of Nigeria are in the hands of kidnappers,” Badejo said. “How many more must die? Jesus Christ came and died so that we might live…So we are not walking corpses merely waiting to be killed, nor are we suicide cases. So we are compelled to ask Nigeria, our leaders: ‘Are you still our leaders? Are we at war? How many more must die?’”