The prosecution of four Christian converts from Islam under an apostasy law abolished two years ago seems to confirm concerns about a return to Islamism by the government in Sudan.

The four young men were charged with apostasy from Islam under Article 126 of the Sudanese Penal Code, and could now face the death penalty in line with sharia (Islamic law). 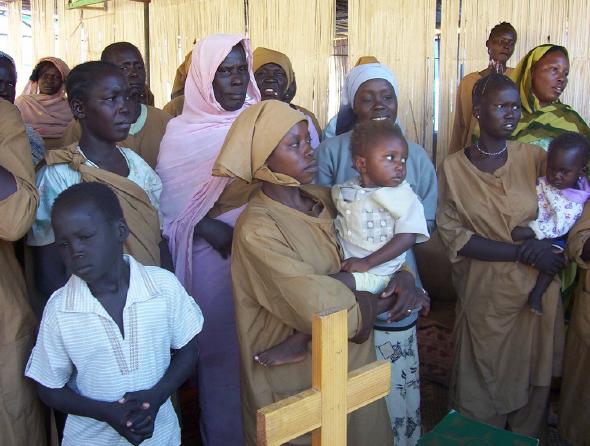 Christians worshiping in Sudan. It was hoped that Islamist rule in Sudan had come to an end.

The Republic of Sudan gained independence from joint British and Egyptian rule in 1956, from which point the country adopted a combination of sharia and English common law. In 1983 the then ruler of Sudan, Colonel Jaafar Nimeiri, imposed full sharia law, declaring Sudan to be an Islamic state.

Under President Omar al-Bashir (who ruled Sudan from 1989 until 2019) sharia was enforced harshly, and the Christian majority (estimated at 3% of the population) suffered fierce persecution. A Criminal Act passed in 1991 made conversion from Islam to another religion officially punishable by death.

Sudan is one of the few countries in modern times where the death penalty for apostasy has been carried out. In 1985 an Islamic theologian, Mahmoud Mohammad Taha, was convicted of apostasy for urging a more liberal interpretation of sharia – he was convicted after a two-hour trial and hanged less than two weeks later. In 1994 two Christians from a tribal group that had converted from Islam in the early 1970s were executed by crucifixion.

The reforms brought about by the transitional government after al-Bashir was ousted from power in April 2019 raised hopes that Sudan was moving towards, in the words of one Sudanese church leader, a “new era.”

Islamist groups, however, responded with calls for the new government to be overthrown, describing the reforms as a “war against virtues.” The new government was removed from power in a fresh military coup in October 2021.

Now it seems that the reforms that had improved the lives of Christians – and especially Muslim-background believers – are being rolled back.

We must pray that our Sudanese brothers and sisters will remain firm in their faith should persecution grow and suffering increase.

We must also remember that our circumstances here change, for better or for worse. Apparent gains can be swiftly reversed, and earthly hopes quickly dashed. But our Lord is unchangeable – He is the same yesterday, today and forever, and nobody can snatch us out of His hand (Hebrews 13:8; John 10:28).