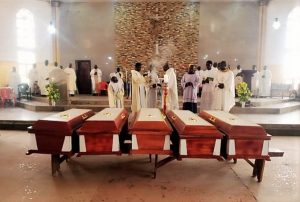 ABUJA, Nigeria (Morning Star News) – Five Christians were killed on Jan. 17 in northern Nigeria’s Kaduna state, while a church leader in the southeastern state of Enugu said Christians there were “under siege.”

“The terrorists shot sporadically as they made their way into the town, killing five Christians and injuring many others,” Ephraim said. “The injured victims are currently receiving treatment at some separate medical facilities.”

Leaders of the Catholic Church’s Kafanchan Diocese in southern Kaduna state, where the attack occurred, said a requiem Mass was held on Thursday (Jan. 19) for the five Catholics slain.

On the same day, suspected Fulani herdsmen and other terrorists attacked St. Monica’s Catholic Church in Kaduna state’s Ikulu-Pari village, Kauru County, and kidnapped a parish catechist. Area resident Epharim Sheyin identified the teacher as Kefas Ishaya and the assailants who took him away at gunpoint as “Muslim terrorists.”

“And as they left, they were shooting sporadically at anyone they sighted,” Bege said, adding that the same church’s parish priest, the Rev. Joseph Shekari, was kidnapped on Feb. 6, 2022 and church worker Sati Musa was killed.

Shekari, kidnapped while ministering away from the church premises, was released after church leaders paid a ransom, Bege said.

“It’s possible they’ve returned for a similar mission to kidnapped the priest again, but they couldn’t find him,” he said. “The catechist, who’s on the church’s pastoral team, has been taken away by the terrorists. We are yet to contacted by the terrorists.”

On Jan. 16, eight armed terrorists attacked Emeka Odoh and four others as they were driving out of Ikem, Odoh said.

“Our car was riddled with bullets, and one of us was shot and wounded,” Odoh told Morning Star News. “Four of us in the car escaped unhurt.”

On Jan. 17 the terrorists kidnapped a Christian from Ikem, he said, and they returned on Jan. 19.

“The gunmen returned for the third time, this time at night, kidnapped three additional Christians and shot one other Christian whom they abandoned,” Odoh said. “He’s currently being treated at a hospital.”

He added that last year a lay leader of the Catholic Church in Ikem was among Christians kidnapped.

In the area’s predominantly Christian Eha-Amufu village, herdsmen and other terrorists mounted attacks in late December that resulted in the deaths of more than 100 Christians, a local leader said.

“Within the last few weeks, over 100 Christians have been slaughtered in Eha-Amufu, and this cuts across all ages,” community leader Okwu Nnabuike said in a press statement at that time. “We are unhappy as no word has come from the federal government as a form of sympathy to those affected. The herdsmen must be stopped from wreaking further havoc forthwith.”

Nnabuike said the “killer herdsmen” were trying to push villagers from their ancestral lands.

“This has to end; the security agencies must show the world that they are not part of what is happening,” he said. “For the umpteenth time, we call on the federal government-controlled security agencies to disarm the AK-47 wielding herdsmen who are slaughtering our people.”

The Rev. Daniel Olinya, Anglican bishop of Ehamufu Diocese, confirmed the killings, saying, “Christians in Enugu state are currently under siege from the terrorists and armed Fulani herdsmen.”

The bishop said hundreds of Christians have been killed and thousands more displaced by the attacks.

Nigeria led the world in Christians killed for their faith in 2022, with 5,014, according to Open Doors’ 2023 World Watch List (WWL) report. It also led the world in Christians abducted (4,726), sexually assaulted or harassed, forcibly married or physically or mentally abused, and it had the most homes and businesses attacked for faith-based reasons. As in the previous year, Nigeria had the second most church attacks and internally displaced people.

“They adopt a comparable strategy to Boko Haram and ISWAP and demonstrate a clear intent to target Christians and potent symbols of Christian identity,” the APPG report states.