Christian Sentenced to Death for 'Blasphemy' in Pakistan Acquitted 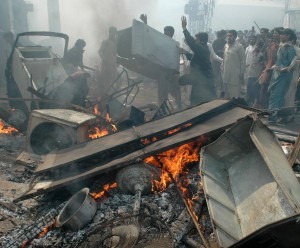 LAHORE, Pakistan (Morning Star News) – A Christian sentenced to death in Pakistan on blasphemy charges six years ago was acquitted by a high court in Lahore on Monday (Oct. 5), sources said.

Sawan Masih, a 40-year-old Catholic father of three, had been handed the death sentence in March 2014 after a Muslim friend accused him of blaspheming against Islam’s prophet. The false accusation resulted in the burning down of more than 150 homes, shops and church buildings in Lahore's impoverished, predominantly Christian Joseph Colony in March 2013.

“Hearing blasphemy cases is not an easy job, as there is a lot of pressure on the judges,” Masih’s attorney, Tahir Bashir, told Morning Star News. “I’m glad that the bench admitted our arguments on the basis of facts and set a good precedent in a country where religious sentiments and emotions often influence judgments.”

Masih’s defense had raised several objections about the police investigation and prosecution before a Lahore High Court division bench. Bashir said police registering the case 34 hours after the alleged blasphemy showed mala fide by the complainant.

“The investigation officer and the trial court ignored this material fact while deciding the case,” he said.

There were glaring contradictions between the First Information Report (FIR) and the statement recorded by the complainant, Shahid Imran, before the trial court, Bashir said. He added that no blasphemous words were mentioned in the initial FIR, and the complainant had included the sacrilegious words in a supplementary statement eight days after registration of the FIR.

“The trial court convicted Masih on the basis of the supplementary statement,” he said.

Unreasonably declaring that “the statement of single witness that somebody had made utterance for contempt of Holy Prophet even inside the house is sufficient to award capital punishment,” the trial court had ruled that a number of witnesses were not required for conviction, Bashir said.

After hearing arguments from both sides, the LHC division bench headed by Justice Syed Shehbaz Ali Rizvi ordered Masih’s acquittal, declaring that the prosecution had failed to establish involvement by Masih in blasphemy.

Masih’s Muslim friend Imran had accused him of insulting the Muhammad during a conversation in March 2013. The day after the conversation, Imran claimed that Masih had blasphemed Muhammad.

A local mosque broadcast the accusation via loudspeakers after the main Friday prayer, and a mob of more than 3,000 Muslims attacked Joseph Colony, forcing Christian residents to flee amid threats that they would be burned as their homes were.

Joseph Colony residents and knowledgeable sources asserted that a local politician had played a central role in the attack in order to help local factory owners who supported him seize Christians’ lands. Pakistan’s Supreme Court endorsed this assertion in a suo motu (on its own accord) statement on the case, but in 2017 an anti-terrorism court in Lahore acquitted all 115 suspects citing lack of evidence.

The verdict shocked rights advocates, as there was ample video proof of the suspects’ participation in the violence.

Impunity for False Accusers
With no presumption of innocence in Pakistan, anyone accused of blasphemy can be jailed while false allegations go unpunished.

In 2018, a Senate Special Committee on Human Rights and the Islamabad High Court had recommended that those making false blasphemy accusations be given the same punishments as those for blasphemy convictions, but the government dismissed the recommendation. The recommendation also stated that anyone registering a blasphemy case at a police station must bring two witnesses.

The punishment for blasphemy in Pakistan ranges from several years in prison to a death sentence. By contrast, a person making a false accusation faces potential punishment of six months in prison or a fine of only 1,000 rupees (US$6).

In a petition seeking the removal of blasphemous content from social media, Islamabad High Court Justice Shaukat Aziz Siddiqui has stated that, though critics demand abolishing Pakistan’s blasphemy laws due to their misuse, stopping exploitation of the law was preferable to abolishing it.