The full horror of the Chinese Communist Party’s campaign against non-atheist minorities, particularly Uighurs and other ethnic groups, is emerging from detainees who have managed to escape communist “re-education” camps where 24-hour close surveillance and apparent forced sterilisation are the norm.

Ethnic Kazakhs, who have fled the camps, have spoken out describing the CCP’s notorious internment camps, officially known as “centres of professional development,” as an “anti-religion exercise targeting non-atheists”. 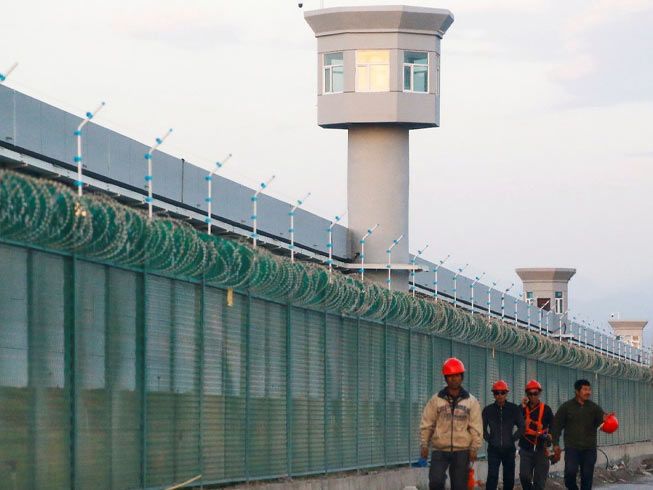 It is estimated there are nearly 400 "re-education" internment camps in Xinjaing region, western China

“You must be an atheist”

The clash of religious belief with Marxist ideology is not a new one says a Barnabas contact. “This is what we faced in the USSR. Only in China, everything has become much worse, since there are surveillance cameras and listening devices everywhere in the camps,” he explained.

“It doesn't matter for the Chinese authorities who you are – a Muslim, a Christian or a Buddhist – you must be an atheist, Chinese and believe in the victory of the Communist Party.”

Christians “did not manage to escape this hell yet”

While the systematic persecution of tens of thousands of ethnic Muslims who have been interred is well documented, little is known about the Christians and other minorities also held in the camps. The contact explained, “We do not have a testimony of Christians because they did not manage to escape from this hell yet. Those who could escape are those who had Kazakh citizenship or a residence permit in Kazakhstan. There are also those who crossed the border illegally.”

A newspaper in Kazakhstan has published harrowing testimonies from Kazakh Muslims who somehow managed to flee the camps and China. Gulzira, originally from the Ili-Kazakh Autonomous Region in China, told her story. A resident of Kazakhstan, where she moved with part of her family in 2014, she went back to China to visit her seriously ill father and eldest daughter. But she never saw them.

Immediately after crossing the border, Gulzira’s passport was confiscated and she was interrogated. A few hours later she was transported to a re-education camp, where she spent the next 15 months, including several months of degrading forced labour. Her fate is similar to hundreds of Kazakh emigrés from China who, for some reason, have returned only to find themselves interred.

“They took my passport in Khorgos [border crossing between Kazakhstan and China] and handed it over to the local police,” Gulzira recalled. Then the police interrogated her, took fingerprints and asked her to read a book aloud while recording her voice, before transferring her to the camp.

“Here you will worship Xi Jinping”

“In the camp I was dressed in camp clothes from head to toe. They told me, ‘Here you will worship Xi Jinping [China's president] and learn Chinese’ … I never found out why I was taken to the camp,” she said.

There were about 800 women in Gulzira’s camp including Uighurs, Kazakhs and women of other nationalities. But two Kazakh women or two Uighurs were never accommodated together so that roommates could not communicate with each other.

“In the morning we went to class like a flock of sheep, and in the evening they drove us to the hostel. When they said – go to bed, we went to bed, and got up when they said to get up. On Sunday we were locked outside and we (10-20 women) were imprisoned. Some had a toilet, some didn't. We used a bucket for toilet … We were not allowed to sleep on our back, because they thought that we would have time to make namaz [ritual Islamic prayers] during this time.” 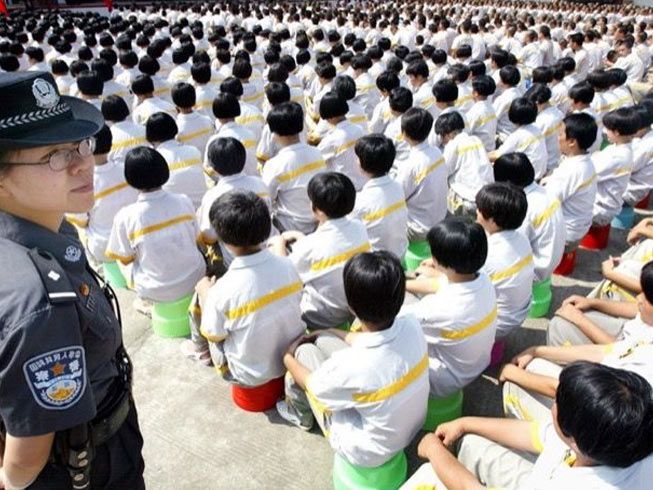 The daily activities of life in the camps is rigidly controlled. The internees are closely monitored with surveillance cameras and harshly punished for the slightest infringement of the impossible restrictions

Regime of impossible restrictions and beatings

“In the morning at 5-6 o'clock we left the hostel … There is a yellow line on the floor from the hostel to the classroom. The ‘students’ follow the yellow line in two rows. There are white lines on both sides. On the one hand, the teacher, on the other, the guard. If we inadvertently coughed or moved our hands, they would hit us on the head with sticks.

“Each was given two minutes to go to the toilet, if we sat for more than two minutes, we were beaten with a stick until we got to classroom. Because of this, we had swelling, our eyes were reddened, and there was a smell from our mouth.

“If we moved without permission, we were told that a camera had spotted us and were taken from the row to another room. There is a chair to which we were handcuffed. The handcuffs shrink as you move.”

Three months into her internment, daily injections and medication were administered to Gulzira and the other women. “We were told that it was a cough injection, it was put in the shoulder. I don't know why, but after this injection, many women stopped menstruating,” she said.

The Muslim women were forcibly fed pork which the camp guards called “relatives food”. “At first we refused, we cried, but after the injections we forgot about our relatives and thought only about food,” Gulzira explained.

If we cried, we were handcuffed to a chair

Gulzira was interrogated 27 times during her time in the camp, often about her religious beliefs. The guards asked her, “Do you read namaz ? We have no religion. Do you believe in Allah?”

In the camp they confiscated and burnt the Quran and zhainamaz (a rug that Muslims spread before prayer). “There were a lot of them, I think, because the relatives were told that if you bring these things and religious books from home, the party will probably forgive you. We were all told, learn Chinese, there are no other nations – Kazakhs, Uighurs, Kyrgyz – you all look like the Chinese people, you live on the money of China and on the land of China,” said Gulzira.

“Sometimes I thought about my relatives and cried. If we cried, we were handcuffed to a chair for 12, 16, or 24 hours,” she added.

Communist Party officials came to inspect the camps recalled Gulzira. “When they came, they dyed our grey hair, put on makeup, sprayed us with perfume. The room was decorated. In front of the crowd were those who spoke Chinese. We greeted them with a smile, went out and danced. We sang the song ‘We are relatives of China,’” said Gulzira.

Then Gulzira was moved on to a “job” in the latter months of her internment. “They said, thanks to the good policies of our government, you will work,” she recalls. “I thought I would be an ordinary cleaner, but I ended up where they did what they wanted with women. I washed the women and cleaned their beds. Then two men entered this room and closed the curtains for two hours. 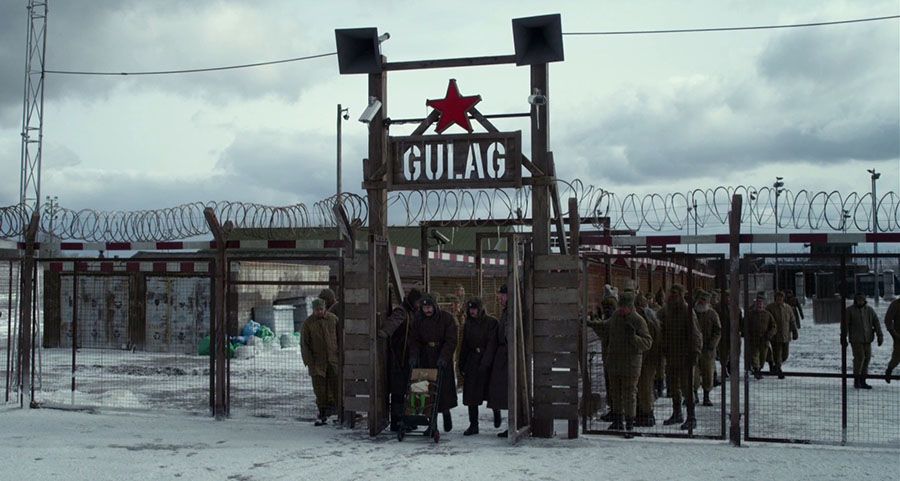 The Gulag was a system of notorious forced labor camps established during Joseph Stalin’s reign as dictator of the Soviet Union. Gulag is an acronym for "Glavnoe Upravlenie Lagerei", or "Directorate of Corrective Labor Camps". It is estimated that as many as 17 million perished in the gulags

“I did this work for six months, then I was returned to the camp. The marriage certificate saved me. Widows and divorced people were subjected to violence, they were taken away at night, and they did not return."

When Gulzira was released from the camp she arrived home [in China] to find three strangers there, two Uighurs and one Chinese woman. “They were watching me. We hugged and ate at the same table, took pictures. When leaving the next day, they left 20 yuan (£2.30; $3; €2.50),” she said. She asked her daughter-in-law why they left the money. "Your relatives are our relatives," she said, explaining that one Chinese person is assigned to be a “relative” to up to ten released camp detainees.

Bullying and torture continued sporadically for a year after Gulzira left the camp, before she was eventually released to Kazakhstan. Although Gulzira had to promise to keep her story secret she bravely decided to speak openly about her horrific experiences soon after her return to Kazakhstan.

“My soul hurts for them”

“I didn't want to talk about it, but how many people disappear there, my soul hurts for them,” said Gulzira, remembering her fellow inmates in the camp. “We became relatives in the same hostel, there were times when we shared the same bread. When I left, others begged me to save them. There were disabled people, deaf and dumb, old grandmothers. How will they learn to write and speak Chinese? Some went crazy and beat themselves,” she said.

The health effects of her internment remain with 41-year-old Gulzira, who is not sure if she will be able to have any more children. “Now my periods do not stop for 17-18 days, my head is spinning. I went to the doctors, but they don't know what the matter is. I don't know if I will be able to give birth yet,” said Gulzira. She is too ill to work and has limited strength in her hands – leaving her unable even to knead dough. The beatings have left her with headaches and her memory is poor. “Once I forgot the path I took my daughter to school. Only my husband works for us, and I spend all the money he earns on medicine,” she said.