Judge in Pakistan Validates Marriage of Muslim to 13-Year-Old

LAHORE, Pakistan (Morning Star News) – A 13-year-old Christian girl kidnapped by a Muslim man in Pakistan leapt toward her mother when she spotted her outside a courtroom on Tuesday (Oct. 27), but her family was not permitted to enter as a judge validated the 45-year-old abductor’s Islamic “marriage” to the child, sources said. 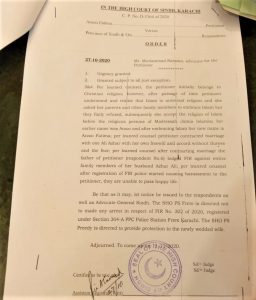 “All of us, including Arzoo’s family and people supporting their cause for justice, are in deep shock and grief after the high court allowed the accused to walk away with the minor girl in front of our eyes,” Shafique told Morning Star News.

In trial court earlier in the day, Azhar’s defense team argued for dismissal of the kidnapping charges while the legal team for the family asserted that Arzoo was the victim of forcible conversion and marriage, Shafique said. The family and their legal team were awaiting a court ruling after the hearing when they learned that Azhar’s team had filed a petition in the high court, she said.

“We rushed to the high court where Arzoo and the accused Azhar were present along with his family members and several lawyers,” Shafique said. “As soon as Arzoo saw her mother, she leapt towards her, but the police and Azhar’s family members dragged her away and forced her into the courtroom of Justice K.K. Agha.”

When the girl's family and their legal team tried to enter the courtroom, they were manhandled by police and Azhar’s family, Shafique said.

“We begged them to let us in, but they refused to budge from the door,” she said. “They did not even allow Arzoo’s parents to enter the courtroom.”

A few minutes later police brought the accused out of the courtroom and said the judge had ordered that Arzoo be sent to a government shelter for women.

“But it was a lie, because when we read the judgment, it stated that Arzoo had admitted in court that she had converted to Islam and married Azhar willingly,” Shafique said.

Underage girls in such cases in Pakistan come under intense pressure, including threats to them and their families, to give false statements in court.

“Justice Agha gave this verdict because he did not get to hear the family’s side of the story,” Shafique said. “Had the police and family members of the accused let Arzoo’s parents enter the courtroom, they could have informed the judge that the documents presented in court regarding their daughter’s age were fake and the photo of the girl pasted on the papers was not Arzoo’s.”

Azhar abducted Arzoo in Karachi’s Muhalla Railway Colony West Camp Road locality on Oct. 13, according to the family, which registered a kidnapping case on the same day. On Oct. 15 police summoned them to the local station and showed them documents claiming that Arzoo was 18 years old and had willingly converted to Islam after marrying Azhar.

Advocate Tabbasum Yousaf of the Sindh High Court said the underage marriage of Arzoo was a violation of the constitution and law, and that the judge failed to consider these legal provisions.

“If somebody is forced into marriage, it’s tantamount to sexual assault,” Yousaf told Morning Star News.

Sections 4, 5 and 8 of the Sindh Marriage Restraint Act forbid marriage of any person under the age of 18 regardless of free will. Arzoo’s parents provided legal documents from the National Database and Registration Authority (NADRA) showing she was born on July 31, 2007 and is only 13 years old. Sexual intercourse with a girl below the age of 16 is statutory rape and carries a death sentence or a minimum sentence of 10 years in prison in Pakistan.

This is the second case of forced conversion of underage Christian girls in Karachi in a year. In October 2019, 14-year-old Huma Younas was kidnapped and forcibly converted to Islam.

In Faisalabad, Punjab Province, 14-year-old Maira Shahbaz was kidnapped and forcibly married and converted to Islam earlier this year. After sending her to a shelter, a court in Lahore on Aug. 4 ordered her to be returned to her abductor based on forged documents, but she escaped on Aug. 22. She told Morning Star News her abductor had blackmailed her into giving false court statements that she had willingly converted and married him.

Favorable Precedent
There is some precedent for justice in Pakistan. In 2018, the Islamabad High Court (IHC) sent a 12-year-old Christian girl back to her parents after the child failed to convince the court that she had willingly converted to Islam in order to marry the man.

According to reports, when asked what her name was, the girl gave a Muslim name and stated that she had converted to Islam “for the purpose of marriage only.”

The court also noted that according to NADRA records, the girl was born on May 20, 2005, meaning that she was below the age of 13 at that time.

IHC’s Justice Shaukat Aziz Siddiqui ruled that he was not convinced that the girl had accepted Islam of her free will and in a secure environment, stating, “rather it appears to be result of inducement and compulsion.”

“I am constrained to observe that this sort of act of abduction and taking [the] shelter of Islam is totally uncalled for and unacceptable,” the judge wrote, adding that Muslims, Christians and all other citizens are equal when it comes to constitutional guarantees.

The judge observed that it appeared prima facie that the accused Muslim man and his father connived with each other to abduct the girl, and he directed police to investigate the matter further. The court also ruled that the validity of the minor girl's marriage certificate with the accused was questionable and needed to be resolved by a family court.

According to data compiled by the Peoples Commission for Minorities’ Rights and the Centre for Social Justice, of 156 incidents of forced conversions which took place between 2013 and 2019, a vast majority of the girls are minors, with numerous cases of girls as young as 12 years old. Muslim groups oppose a minimum age for conversion or marriage, claiming that this is not sanctioned by Islam.

Although intercourse with a girl below the age of 16 is statutory rape, in most cases a falsified conversion certificate and Nikahnam, or Islamic marriage certificate, influences police to pardon kidnappers.