Convert says family has been 'hunted' for years.

NAIROBI, Kenya (Morning Star News) – A Christian in Somalia long persecuted for his faith had not seen his children attacked until this month, when an assault on his 7-year-old son sent him to the hospital for three days. 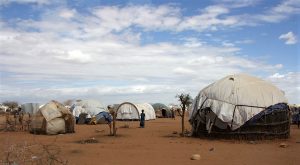 The convert from Islam told Morning Star News he had finished a Bible study with other underground Christians on Oct. 9 in Dhobley, in Somalia’s Lower Juba administrative region, when area Muslims sent boys about 13 years old to assault his son as he returned from a shop at about 6 p.m.

“My son was attacked by three boys who beat him and injured his private parts,” the father, whose name is withheld for security purposes, told Morning Star News by phone. “He suffered a swollen and injured face as well as an injured left hand from a knife. My son lost a lot of blood and was rushed by one of the secret believers to a nearby dispensary in Dhobley.”

He said his son is still suffering the effects of the attack and needs specialized medication that he hopes can be obtained in Kenya; Dhobley is about 50 kilometers (31 miles) from Somalia’s border with Kenya.

“It is not possible to get justice in this part of Somalia where almost everyone is a Muslim,” he said. “We are being hunted down like wild animals because of putting our faith in Issa [Jesus]. Always our security is at stake. We need prayers and financial support for the treatment of my son.”

The father of five children, the oldest 7 and the youngest 4 months old, said Muslims began targeting him soon after he left Islam eight years ago. After arriving in Kenya in 2012 from another country undisclosed for security reasons, he met a German missionary couple in Wajir who shared the gospel with him. Two months later, he said, he decided to follow Christ.

“Soon Muslims discovered my new faith in Christ due to my frequent visit to the home of the missionary couple,” he said.

He fled to Dadaab refugee camp near Kenya’s border with Somalia, where he married a Somali refugee. They rented a house in Liboi on the Kenyan side of the border, and soon he began holding small fellowship meetings.

When his wife put her faith in Christ in 2013, her father, who had opposed their marriage, soon learned about her conversion and showed up in Liboi from his quarters in the Dadaab complex’s Ifo refugee camp.

“He was so furious he forcefully entered into my room and destroyed some of my belongings, beddings and utensils,” the Christian said. “Then he turned to my wife and began slapping her and beat her with a stick, which led to a miscarriage of a 6-month fetus. Immediately he took her away with all of our properties to a far location inside Somalia.”

Communication with his wife was cut off for three years, he said. In 2016 his mother-in-law informed him of his wife’s whereabouts, he said.

In August 2016, his wife arrived from Somalia still professing her faith in Christ, and they were happily reunited. By September 2017, Muslims in Liboi had discovered their whereabouts and beat him with sticks, injuring his left leg, he said. In an effort to escape further assaults, they began moving from one rented house in Liboi to another.

“In November 2018, my father-in-law and other Muslims organized to kill me while I was coming from the market,” he said. “Three men stopped me and started beating me with sticks and blows. I became unconscious.”

Passers-by took him to a nearby dispensary, where he received treatment for severe pain in his back, as well as injuries to his left hand and knee.

His father-in-law again showed up at his home in Liboi in July 2019 and again struck his wife, he said.

“He entered my house and started quarreling and uttering abusive words and immediately began slapping her in front of me, and then he took her away the second time and locked her in his house while she was eight months pregnant,” he told Morning Star News.

He reported the attack to police, who recovered his wife. She received immediate hospital treatment for her injuries.

“After three days, she gave birth,” her husband said. “My father-in-law was locked down in the jail cell [in Kenya]. The Muslims threatened to kill me, so I requested the police to release him, which they did.”

Islamist pressure forced him to move his family to Dhobley, Somalia in July. He began attending underground prayer meetings, and when area Muslims learned about them, he and his family were forced to move to another village in the vicinity.

“This time ‘round, the Muslims used young boys to attack my son,” said the convert, who has moved with his family to yet another area undisclosed for security reasons. “This incident traumatized us as a family, which led to high blood pressure for my wife. I am sure that I will overcome all these persecutions with the help from Christ. Our lives are in the hands of Christ. We needs prayers at this difficult moment and for the recovery of my son.”

Somalia is ranked 3rd on Christian support group Open Doors’ 2020 World Watch List of the 50 countries where it is most difficult to be a Christian; Kenya is ranked 44th .