A knife-wielding attacker shouting “Allahu Akbar” beheaded a woman and killed two other people in a suspected terrorist attack at a church in the French city of Nice today, 29 October, while a gunman was shot dead by police in a separate incident.

Within hours of the Nice attack, police killed a man who had threatened passers-by with a handgun in Montfavet, near the southern French city of Avignon. He was also shouting “Allahu Akbar”, according to radio station Europe 1. 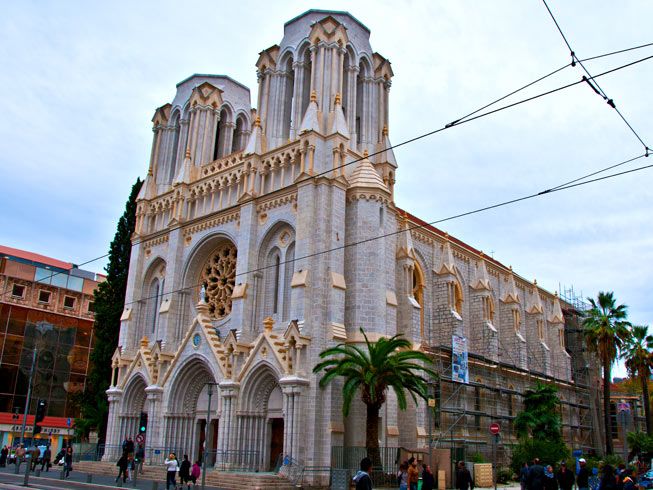 A church warden at Notre Dame Church, Nice is understood to be among the three killed in the brutal knife attack

In Saudi Arabia, also on 29 October, state television reported that a Saudi man had been arrested in the city of Jeddah after attacking and injuring a guard with a knife at the French consulate.

Nice’s mayor, Christian Estrosi, who described the attack in his city as terrorism, said on Twitter it had happened in or near Notre Dame Church and was similar to the beheading of French teacher Samuel Paty in an attack earlier this month in Paris.

Estrosi said the attacker had repeatedly shouted the phrase “Allahu Akbar”, even after he had been detained by police. One of the people killed inside the church was believed to be the church warden.

“Enough is enough,” Estrosi said. “It’s time now for France to exonerate itself from the laws of peace in order to definitively wipe out Islamo-fascism from our territory.”

A representative of the French Council for the Muslim Faith strongly condemned the attack, which took place on the birthday of the Islamic prophet Muhammad. “As a sign of mourning and solidarity with the victims and their loved ones, I call on all Muslims in France to cancel all the celebrations of the holiday of Mawlid,” he said.

France is still reeling from the beheading earlier this month of teacher Paty by a suspected Islamic extremist of Chechen origin. The attacker had said he wanted to punish Paty for showing pupils cartoons of the Islamic Prophet Muhammad, which Muslims consider blasphemous, as part of a lesson on freedom of speech. The teacher had given Muslim pupils in his classroom the opportunity to look away or leave the room before the images were shown in the lesson.

Since Paty’s killing, French President Emmanuel Macron defended publication of the cartoons as part of France’s “secular values” and described Islam as “a religion that is in crisis all over the world”, which led to an outpouring of anger in parts of the Muslim world.

Nice was the scene of a terrorist attack on 14 July 2016, when a cargo truck was driven into crowds celebrating Bastille Day on the Promenade des Anglais, killing 86 people and injuring more than 450 others. Islamic State (IS) later claimed one of its followers carried out the attack, which was perpetrated by a Tunisian living in France.