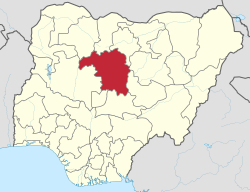 Fulani attacks in the areas have driven 50,000 people to live with relatives or in camps for Internally Displaced People (IDP) in southern Kaduna state, said Luka Binniyat, spokesman of the Southern Kaduna People’s Union (SOKAPU). Their villages are either occupied by Fulani herdsmen or are too unsafe for return, he said.

A Christian father of two who attempted to return to his village on Oct. 29 was killed by Fulani herdsmen, he said. Kaduna Garba, 32, had left an IDP camp in Kallah, Kajuru County, with Francis Bala, 38, that morning to explore the security situation of their native Mangunguna village, captured by Fulani militia on May 18, Binniyat said.

“Government-forsaken Christians of Kallah ward, Kajuru LGA of Kaduna state, yesterday morning [Oct. 29] witnessed another tragedy,” Binniyat said in a press statement. “The two men were ambushed and attacked just before getting to the village by armed Fulani with daggers and machetes, and Kaduna Garba was instantly killed while, Francis Bala escaped with injuries.”

He said Fulani militias have occupied 45 villages in the north-central Nigerian state’s Chikun County, 24 villages in Kajuru County, 32 villages in Kachia County and others in Zaongon Kataf County, all areas where people once attended Baptist, Assemblies of God, Catholic, Evangelical Church Winning All and Pentecostal churches.

“As of Oct. 30, at least 100 communities scattered in four Local Government Areas of southern Kaduna have been displaced and taken over by armed Fulani militia unchallenged by the state, even after our repeated publication of this impunity to the government,” Binniyat said.

In predominantly Christian Kunai village, Fulani herdsmen on Oct. 29 ambushed two Christians on a motorcycle on the Buruku-Damba-Kasaya road in Kunai ward, Chikun County, he said.

“Ezra Nayaro, 45 and father of seven children, was shot dead while the other passenger escaped into the bush,” Binniyat said.

On the outskirts of Kwakwa village, Zangon Kataf County, herdsmen on Oct. 26 ambushed and killed Dachomo Alamba, a 20-year-old Christian, and wounded another, he said.

“Irmiya Bitrus, 20, from Kwakwa village, in Atyap Chiefdom, Zangon Kataf LGA, is today at a private hospital in Zoknwa nursing grievous injuries sustained from deep machete cuts,” Binniyat said. “His friend, Dachomo Alamba, died of his wounds on the spot after the assailants fled. Thus three Christians from southern Kaduna have been killed by Fulani armed men in five days, unprovoked, and no one is doing anything about it.”

He added that herdsmen killed seven other Christians in Mayi-Mashin village in separate attacks over the past three months.

“Manyi-Mashin village in Atyap chiefdom was razed, two Christians were killed, the entire village was sacked, and its Christian villagers were forced to flee to an IDP camp in nearby Apiako village,” he said. “And this is apart from the fact that not less than five Christians were killed by Fulani armed men and several others injured in the area.”

“The Fulani men who were armed with guns and machetes laid ambush along the road leading to Igumale town at about 6:30 a.m. and shot at persons passing through Rijo-Ogege bridge,” area resident Joseph Iguche said in a text message to Morning Star News.

Pius Moses, a 30-year-old member of the Methodist Church in Nigeria, was slain, he said.

“He was on his way to the town of Otukpo when he was shot and killed by the Fulani gunmen,” said Oguche, adding that the herdsmen also targeted him.

“I was on my way from Igumale town to Otukpo town, riding on my motorcycle, when the Fulani gunmen also shot at me, but the bullets missed me; I narrowly escaped being killed,” he said. “However, I saw the corpse of the other Christian victim who was killed a few minutes before I got to the spot.”

“The Fulani gunmen shot at persons passing along that road, including police officers who were on patrol in the area,” Oche told Morning Star News by text message. “A police officer was shot dead, and a passerby who was riding a motorcycle was also killed.”

“One of the police officers was hit, and he died, while another man who was on his motorcycle was also shot dead at the same spot,” Anene said. “Corpses of both the police officer and the second victim have been taken to the morgue at a hospital in the area.”

“Fulani gunmen on Sept. 28 invaded at about 6 p.m. and killed two Christians,” Terwerse said. “One of them was a nursing mother by the name of Kwaghaondo Tiev; she died leaving a month-old baby. The second Christian was Agnes James, 20; both of them were members of the NKST [Nongu u Kristu u i Ser u sha Tar, Universal Reformed Christian Church].”