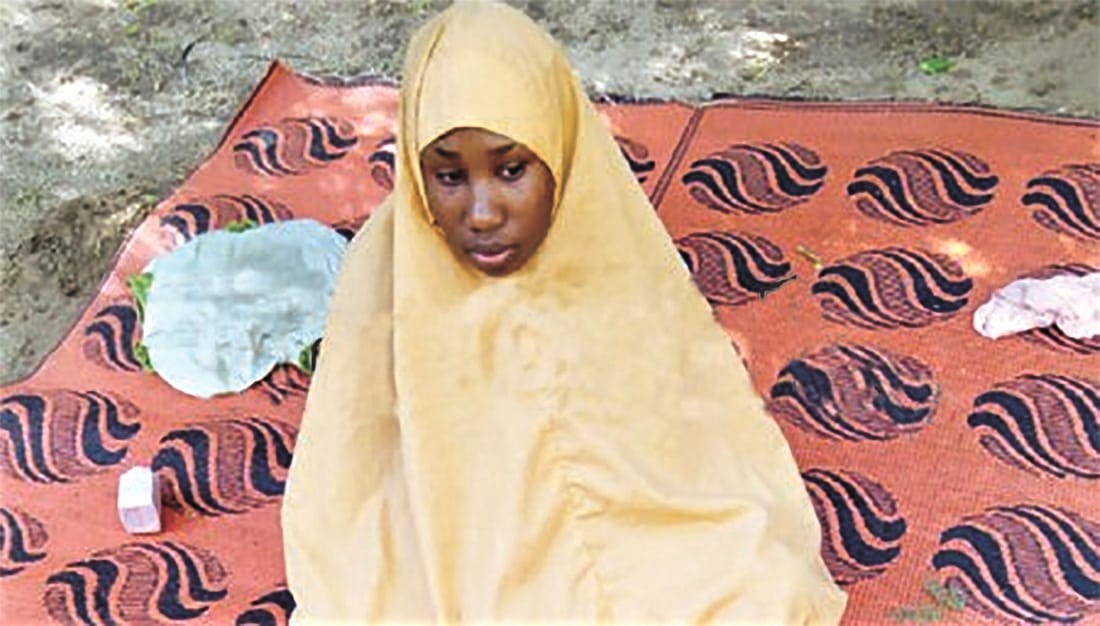 Leah Sharibu in captivity in photo released by captors in August 2019.

In the wake of attacks and kidnappings by Islamic extremist group Boko Haram and its offshoot Islamic State West Africa Province (ISWAP), leaders of the Evangelical Church Winning All (ECWA) called for the release of four members long held captive by Islamic extremists in the country’s northeast.

The Rev. Stephen Baba Panya, president of the ECWA, said church leaders are troubled at the lack of effort by the Nigerian government to free church members years after Islamic extremist groups took them captive. He called for prayer for high school student Leah Sharibu, two aid workers, university student Lillian Gyang and the 112 girls who remain captive of the 276 kidnapped from a high school in Chibok, Borno state in 2014.

“Please join faith with me, and let us pray standing on God’s promises in Matthew 18:18-19 that Boko Haram/ISWAP or any other Islamic terror group shall not determine the fate of God’s beloved daughters Leah Sharibu, Alice Loksha Ngaddah, Grace Lucas, and Lillian Gyang who are ECWA members, and also the remaining Chibok girls,” Pastor Panya said in a statement sent to Morning Star News.

Leah Sharibu, 15 years old when she was kidnapped by Boko Haram on Feb. 19, 2018 from the Government Girls’ Science and Technical College, in Dapchi, Yobe state, was one of 110 girls taken captive; the 109 Muslim girls were released while Leah remained captive when she refused to renounce her Christian faith.

Ngaddah, mother of two children and an aid worker with UNICEF, was abducted on March 1, 2018 in Rann, Borno state, when ISWAP militants attacked an Internally Displaced Persons camp where she was working. Her aged mother reportedly died of trauma soon after learning about the kidnapping.

Taku, a health worker with Action Against Hunger, was kidnapped by ISWAP militants on July 18, 2019, along the Damasak-Maiduguri highway in Borno state. She also was ministering to displaced people.

Lillian Daniel Gyang, a student at the University of Maiduguri (UNIMAID) in Borno state, was kidnapped on Jan. 9 by ISWAP while returning to school from the Christmas and New Year’s break from her native Plateau state.

“The attacks on Pulka and Gwoza towns started at about 9 p.m. and lasted till around 11p.m.,” area resident Vanessa Muda told Morning Star News by text message. “The Boko Haram terrorists invaded our towns shooting indiscriminately on our people.”

“They were repelled when personnel of the Nigerian army who were stationed here fought them and forced them to retreat from Gwoza and Pulka towns,” he told Morning Star News by text message. “Our towns have been under constant attacks from Boko Haram since 2014, and at a time, Gwoza town was made the headquarters of the Boko Haram caliphate until the Nigeria army retook the town from them in 2018.”

The attacks came on the heels of an appeal by leaders of the Church of the Brethren in Nigeria (EYN), for prayer for Christians in southern Borno state facing terror from both Boko Haram and ISWAP militants.

“It is harvest time, which is challenging in normal years, but in these past years includes the threat of Boko Haram destroying the crop or attacking people as they harvest,” the leaders wrote in a Nov. 6 email. “Pray for many vulnerable villages in southern Borno state and other areas far from military bases.”

Six Nigerians Convicted
Lela Gilbert, senior fellow for international religious freedom for the Family Research Council, stated in a recent report that in spite of frequent appeals from Nigerian church leaders across the denominational spectrum and international human rights advocates, violence is escalating.

“Many informed observers describe Nigeria’s political leadership as both incompetent and corrupt,” Gilbert noted. “But that’s only part of the problem. Not only are they almost entirely Muslim in their religious affiliation (while the country’s population is roughly half Christian), as previously noted, several governmental leaders – beginning with President Muhammadu Buhari – belong to the Fulani tribe, as do numerous military and police officials. This is seen as one of the major roadblocks to reform, particularly with regard to the Fulani jihadi massacres.”

In the United Arab Emirates, authorities were able to convict six Nigerians resident in the UAE for financing Boko Haram activities in Nigeria, according to press reports.

An Abu Dhabi Federal Court of Appeal convicted the six Islamists of providing Boko Haram with $782,000.