A short but bloody conflict flared up this year in Nagorno-Karabakh, an Armenian-populated enclave in Azerbaijan. The events echoed the horrific but forgotten Armenian Genocide of a century earlier, which is officially recognised by only 31 countries today.

Why was the genocide not prevented?

In all, it is estimated that 3.75 million Christians died in a genocide in which not only Armenians but also Assyrian, Syriac and Greek Christians were targeted for their faith by the Ottoman authorities.

By 1922, the Armenian population of the former Ottoman Empire was depleted by at least 90%. Why did no nation, especially the European “Christian” powers, rise up to protect the Christian minority living under Ottoman dominion from the annihilation that came in a sequence of massacres, beginning in 1843 and peaking in the horrific slaughter of 1915? 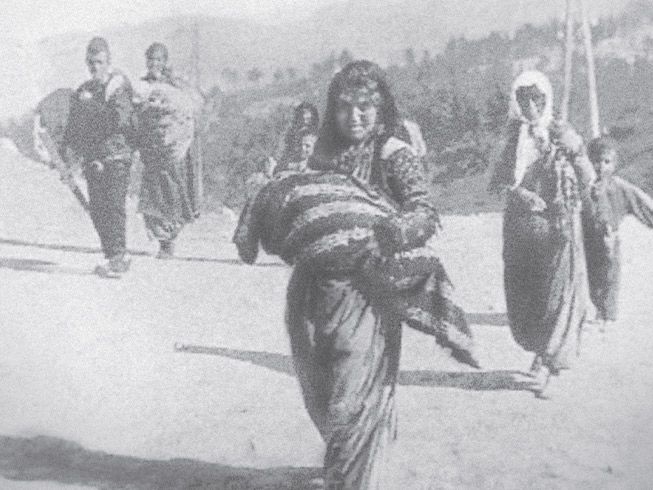 Armenian Christian walking to their deaths in the genocide. Syria. 1915

A collective “denial” about the Ottomans’ staggering crime against humanity seemed to grip the West, even as the genocide reached its peak in 1915, when approximately 800,000 Armenians were killed. World powers, including Britain, France, Germany, Russia and the USA, which had failed to act – leaving millions of fellow-Christians to perish – turned their backs not only on the facts of history, but on their own shameful complicity.

“Who, after all, speaks today of the annihilation of the Armenians?” were Hitler’s words in a speech to his generals on the eve of the German invasion of Poland at the beginning of the Second World War. His directive was to kill every man, woman and child of the mainly Roman Catholic Polish population, just as the Nazis were soon to slaughter millions of Jews, and other “undesirables”, in Germany. Hitler reasoned that if history had simply overlooked the first major genocide of the century, who would care about the extermination of the Polish people?[i]

Hitler’s chilling analysis that history had “forgotten” the Armenian Genocide proved to be correct. Not because no one had known what was happening to the Christians, as the many debates and diplomatic discussions of the day on the topic show, but because countries’ own vested political interests took priority – so governments preferred to look away.

Only 31 countries recognise the Armenian Genocide

Even today only 31 countries, or significant parts of them, officially recognise the Armenian Genocide including Chile, France, Germany and Russia (see full list below). The US Congress voted in 2019 to recognise the Genocide but the Trump administration responded with a statement that it did not consider the mass killings of Armenians in 1915 to be genocide. Syria recognised the Genocide in 2020.

Significant Western countries such as Australia, Denmark, Israel, New Zealand, Norway and the UK have not recognised it, although the parliaments of Wales and Scotland have voted to do so. The Australian states of New South Wales and South Australia have recognised it, but not Australia as a whole. The Iranian government has often unofficially recognised the Armenian Genocide (e.g. the Iranian ambassador to Armenia lays a wreath every 24 April on the Armenian Genocide Memorial) but the only part of Iran that has officially recognised it is the Tehran Regional government.

It is impossible to overstate the importance of the Armenian Genocide and its continuing significance. Armenia today believes that her very existence is at risk and that in the coming years Turkey will move against her, possibly bringing to an end the existence of Armenia as a sovereign state. Armenians see the possibility of a new genocide looming before them. But there is a further significance: in many other parts of the world, where Christians are minority communities in their own countries, they are currently persecuted and at risk. If the world chooses to stand on the sidelines, albeit mouthing platitudes, and fails to take any active steps to assist Armenians in Nagorno-Karabakh in 2020, why would they assist Christian minorities in any other part of the world, even if they were facing genocide?

GOVERNMENTS AND PARLIAMENTS OF 31 COUNTRIES RECOGNISING THE ARMENIAN GENOCIDE:

Austria – Statement of the ‪‎Austrian Parliament on the Centennial of the Armenian Genocide perpetrated in the Ottoman Empire, 22 April, 2015

Belgium – Resolution of the House of Representatives of the Kingdom of Belgium – July 24, 2015

Bolivia – Senate and the Chamber of Deputies Resolution – November 27, 2014

Chile – Resolution of the Chamber of Deputies of Chile, April 14, 2015

Czech Republic – Resolution of the Chamber of Deputies of the parliament of Czech Republic condemning and recognizing Armenian Genocide and other crimes against humanity, April 26, 2017

France – Decree of the President of France, Emmanuel Macron, recognizing April 24 as a National Memorial Day of Armenian Genocide, April 10, 2019

Germany – Resolution of the Bundestag of the Federal Republic of Germany, June 2, 2016

Italy – Initiative of the chamber of deputies of Italy encouraging the government of Italy to recognize Armenian Genocide, April 10, 2019

Luxembourg – Resolution of the Parliament of the Grand Duchy of Luxembourg, May 6, 2015

Paraguay – Resolution of the Senate of the Republic of Paraguay, October 29, 2015

Portugal – Position of the Assembly of the Republic (the Parliament of Portugal) on its position on the Armenian Genocide, April 26, 2019

Switzerland – Switzerland has recognized the Armenian Genocide and its denial is punishable with a fine. There are around 5,000 people of Armenian descent living in Switzerland.

Syria – Resolution by the People’s Council of the Syrian Arab Republic on recognition and condemnation of the Armenian Genocide perpetrated by the Ottoman Empire, February 13, 2020

Vatican City – Through a statement by Pope Francis at the Vatican, April 12, 2015