Centuries of Christian Heritage “Under Threat” in Turkey

Centuries of heritage belonging to Christians and other minorities in Turkey are under threat following the agreement of new import restrictions between the US and Turkey, according to Armenian and Christian groups.

They have condemned as “reckless” and “a travesty” the bilateral Memorandum signed by the Trump administration in its final hours whereby the US has agreed to place import restrictions on heritage objects from Turkey and to repatriate “trafficked” cultural property. This, in effect, places the care and control of the vast heritage of all cultural, religious and ethnic groups in the hands of the Turkish government, which has a long track record of “destroying minorities” and their holy sites, even to the point of “erasing their memory from the landscape of their ancient, indigenous, homelands”, in the words of Armenian leader Aram Hamparian. 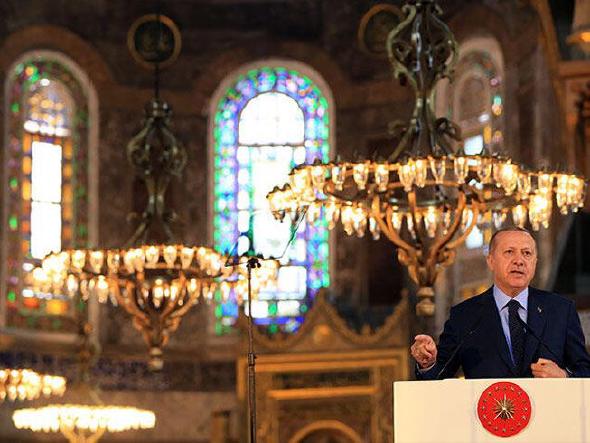 Turkish President Recep Tayyip Erdoğan recited an Islamic prayer in the Hagia Sophia at the opening of a festival in March 2018. He invited the guests present to join him in silently reciting the first verse of the Quran, which is part of ritual Islamic prayers. He dedicated the prayer to the “souls of all who left us this work as inheritance, especially Istanbul’s conqueror.” After he ordered that Hagia Sophia become a mosque in July 2020, President Erdogan himself recited Islamic prayer at Friday prayers as tens of thousands gathered at the cathedral for the official reopening. Ali Erbas, the Turkish Head of Religious Affairs, mounted the basilica’s pulpit with a sword in his hand, a symbol of conquest in the Ottoman tradition

The Christian presence in Turkey pre-dates Islam by many centuries. The territory was home to the “Seven Churches which are in Asia”, mentioned in Revelation (1:4), and Cappadocia, in central Anatolia, is a region where early Christians took refuge from Roman persecution.

The Association of Art Museum Directors (AAMD) issued a statement on 21 January that highlighted its concerns over the agreement which comes under Article 9 of the 1970 UNESCO Convention (the “MOU”). The AAMD described Turkey’s request for international cooperation against the illicit trafficking of cultural property as “troubling” and explained that “for many types of cultural property, a MOU will not curb looting and destruction because those actions are being carried out by the Turkish state itself.”

Aram Hamparian, Executive Director of the Armenian National Committee of America (ANCA), said it was “reckless and irresponsible” to place the vast religious and cultural heritage of the Armenians, Greeks, Assyrians, Chaldeans, Syriacs, Arameans, Maronites, Jews and Kurds into the hands of Turkey which, he said, has “openly, unapologetically, and systematically spent the past two centuries destroying minorities, desecrating their holy sites, and erasing even their memory from the landscape of their ancient, indigenous homelands”.

Endy Zemenides, Executive Director of the Hellenic American Leadership Council, describing the new memorandum as “a travesty”. He added, “Those that participated in the signing of the agreement are potentially complicit in the continuation of Turkey’s oppression of its Christians.”

Toufic Baaklini, President of the campaign group In Defence of Christians (IDC), slammed the agreement as a “shameful stamp of American approval on the destruction of Christian cultural heritage in Turkey”.

The three organisations, whose concerns are echoed by a number of cultural rights and museum bodies, pledged to work with the new American administration to ensure the agreement is used to protect Christian heritage in Turkey.

In July 2020, Turkey’s Islamist President, Recep Tayyip Erdogan, ordered the world renown Hagia Sophia cathedral in Istanbul to be turned from a museum into a mosque, a decision that was opposed by the World Council of Churches, and “deeply regretted” by world heritage watchdog UNESCO. A month later, Erdogan gave the go-ahead to changing the St. Saviour in Chora Church building in Istanbul, which was also a museum, into to a mosque. Erdogan, has been outspoken about his desire to recreate the Ottoman Empire. Repression of religious minorities and hostility towards Christians has increased in recent years in Turkey, with the rise of Erdogan’s AKP party.