Eight Christians have been abducted by bandits in Kaduna State, Nigeria, after their minibus was stopped on the way from Kaduna city to Kafanchan on 26 March.

The minibus – displaying on its side the name “Redeemed Christian Church of God” – was held up at around 7 p.m. local time about 63 km from Kaduna city. 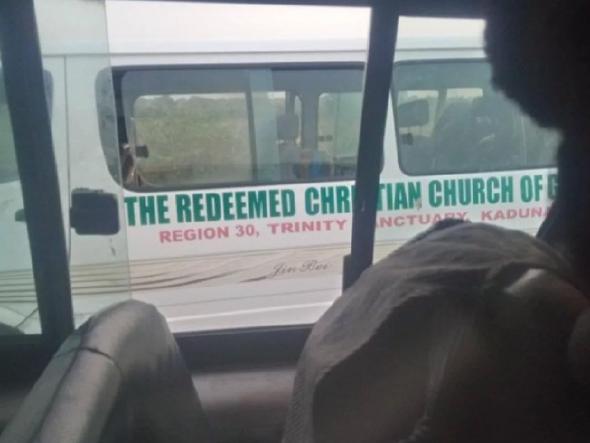 The eight Christians were travelling by minibus from Kaduna city to Kafanchan on an evangelistic mission [Credit: Nigeria Daily Post]

The northern part of Kaduna State is mainly Muslim and the south is mainly Christian.

The Christians, all adults, were travelling to Kafanchan, on an evangelistic mission.

Alao Joseph, Public Relations Officer of the church in Kaduna, said that the incident has been reported to the police, “with the hope that they will help in securing the immediate rescue of the church members”.

Christians in Nigeria are often targeted for abduction, whether by Islamist militants or by bandits. In January 2021 a church minister was abducted along with his brother and murdered by machete-wielding bandits in Gulu, Niger State. Another pastor was abducted by Boko Haram Islamist militants on Christmas Eve 2020 in Pemi, Borno State, and held for more than two months before he was released on the day the terrorist organisation had said it would kill him.

Abducting civilians, especially Christians, is a major part of Boko Haram’s activities; over a thousand children have been kidnapped since the group was founded in 2002. Christian schoolgirl Leah Sharibu has been held by Boko Haram for more than three years. The Islamic militants refused to release her because she would not renounce her faith and convert to Islam. Sharibu has been forced to marry a Boko Haram commander and has given birth to two children while held captive.

Kaduna State lies in Nigeria’s Middle Belt, where at least 240 Christians have been killed in Islamic attacks since the beginning of July 2020.