The Armenian National Commission for the United Nations Educational, Scientific and Cultural Organization (UNESCO) has condemned the alleged demolition of a church building in Mekhakavan, Nagorno-Karabakh by Azerbaijan.

A statement by the Commission described the demolition as “another act of cultural crime by Azerbaijan.” 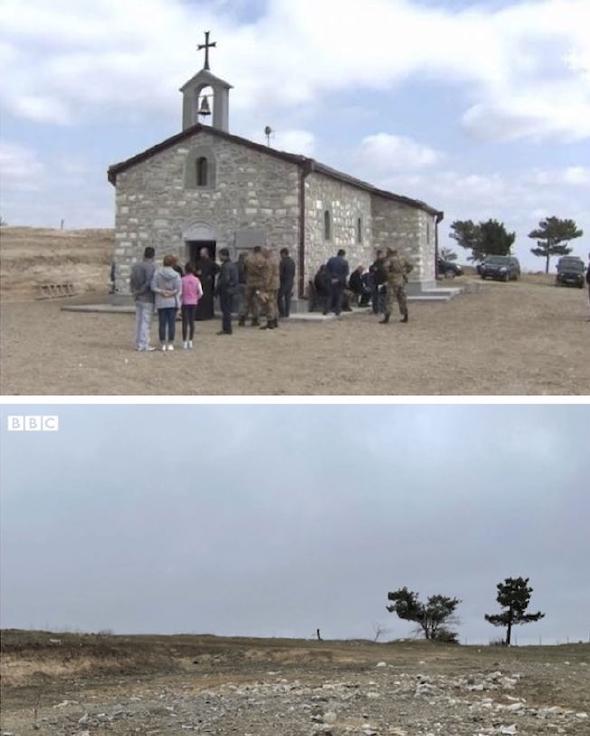 The Armenian church in Mekhaven was demolished by Azerbaijani forces after the end of hostilities in Nagorno-Karabakh. [Credit: BBC]

“Armenian monuments of Artsakh [Nagorno-Karabakh] under Azerbaijani occupation are [vandalized] and destroyed in ISIS-style,” the statement continued, referring to vandalism of religious sites undertaken by the Islamic State (IS, ISIS, ISIL, Daesh) terrorist group in other parts of the world.

The town of Mekhakaven came under Azerbaijani control after the 2020 Nagorno-Karabakh war between the Republic of Armenia and Turkish-backed Azerbaijan. The conflict was ended by a Russian-brokered peace agreement, which allowed Azerbaijan to hold onto the territory they had just taken from the Armenians and also awarded them further sections of territory that Armenia had taken from Azerbaijan some three decades earlier but which had been Armenian for many centuries until 1923.

A BBC News report demonstrated that the church building remained standing after the area had been taken by Azerbaijan and therefore was not destroyed during the conflict. The report included a video that showed Azerbaijani soldiers, including one standing on top of the church, shouting “Allahu Akbar.”

The news emerged a week after reports of the alleged destruction of a 200-year-old church in the city of Shushi, which had also come under Azerbaijani control. During the conflict, advancing Azerbaijani forces were accused of launching an attack on Ghazanchetsots Cathedral, also in Shushi.

On a visit to Nagnorno-Karabakh on March 15, Azerbaijani President Ilham Aliyev ordered the removal of medieval Armenian inscriptions from churches and other monuments, claiming that the inscriptions were not genuine.

“All these inscriptions are fake – they were written later,” said Aliyev. “They have created a false history for themselves in our ancient lands.”

Azerbaijan has been accused of committing war crimes against both military prisoners of war and civilian detainees during and after the 2020 conflict.