The United States Commission on International Religious Freedom (USCIRF) has added Azerbaijan and Turkey to its special watch list (SWL) for “engaging in or tolerating severe violations of religious freedom.”

The 2021 USCIRF annual report raised concerns about the desecration and destruction of churches, monasteries and other Christian sites by Azerbaijan in Nagorno-Karabakh. 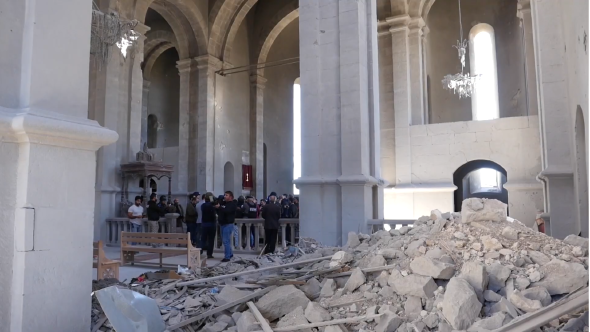 The report cites the shelling of the Ghazanchetsots Cathedral in Shusha on October 8, 2020 as a probable war crime, adding that there were concerns about the “various Armenian churches, monasteries, and cemeteries lost or subsequently ceded to Azerbaijani control”.

“By the end of the reporting period,” the committee added, “there was evidence that some of these sites – such as the cemetery of an Armenian church in Hadrut – had already been vandalised”.

In March, the Armenian National Commission for UNESCO condemned as “another act of cultural crime by Azerbaijan” the alleged demolition of a church building in Mekhakavan, Nagorno-Karabakh.

Azerbaijan’s invasion of Nagorno-Karabakh, an ethnic-Armenian enclave within the Muslim-majority Republic of Azerbaijan, began at the end of September 2020. The conflict ended in November with Azerbaijan having taken significant territories formerly held by the Armenian community.

The Azerbaijan offensive was supported politically and militarily by Turkey, as confirmed by the U.S. State Department in April.

Turkey was also added to the SWL, the report noting the July 2020 re-conversion into a mosque of Istanbul’s former cathedral Hagia Sophia, which had been a museum since 1935, as well as the failure of the government to prosecute crimes such as the vandalism of an Armenian church in Bakirköy in May 2020.

Meanwhile, Azerbaijan has opened a Military Trophy Park in the capital city, Baku, which celebrates the Azerbaijani invasion of Nagorno-Karabakh.

The park includes a tunnel lined with hundreds of helmets from killed Armenian soldiers, and waxworks of Armenians with exaggerated racial features, some of which are chained in replica Azerbaijani prison cells.

Azerbaijan has refused to release an estimated 200 military and civilian prisoners who remain in captivity, arguing without foundation that the captured Armenians are “terrorists” who should not be released. The International Committee of the Red Cross has been denied access to provide humanitarian aid to the prisoners.

Azerbaijan has also been accused of committing war crimes against military and civilian prisoners of war during and after the 2020 conflict.