Thousands have fled Mindat, a mountainous town in the majority Christian state of Chin, after it came under bombardment from the Myanmar army.

They are taking refuge in nearby forests while those who remain in the town, which was overrun by the army on May 15, are living without water or power, according to media sources. 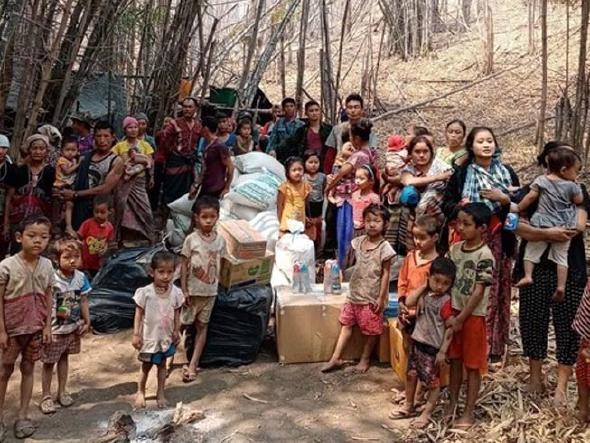 Thousands of Christians in Myanmar have fled into hiding in the jungle after their homes came under fire from the Myanmar army.

I had to hide in the forest for safety,” said a Mindat resident. “There are a lot of people here. Some women are giving birth in the forest.”

Another resident told Reuters that villages around Mindat were caring for about 2,000 displaced people in camps and churches. “Children and the elderly make up a big proportion of the groups,” he said. “Some didn’t have sandals. They trekked through the forest barefoot for days.”

The upsurge in fighting in Chin State has forced more people to cross the nearby border with India, where a government official said more than 15,000 had sought refuge since the army seized power in Buddhist-majority Myanmar in a military coup on February 1.

The United Nations Office for the Coordination of Humanitarian Affairs (OCHA) said there were reports of civilians killed and injured, and civilian property damaged or destroyed, when the army attacked Mindat to oust members of the Chinland Defense Force.

“Access by humanitarian partners to the people fleeing violence or those still in their homes is challenging due to insecurity,” added OCHA.

In Myanmar’s Christian-majority Kachin state, at least two people have been killed and an estimated 5,000 forced to flee following recent military airstrikes on up to nine villages in the region.

The Myanmar army – also known as the Tatmadaw – has for many years persecuted the Christian-majority Kachin, Chin and Karen ethnic groups, as well as the Muslim-majority Rohingya.