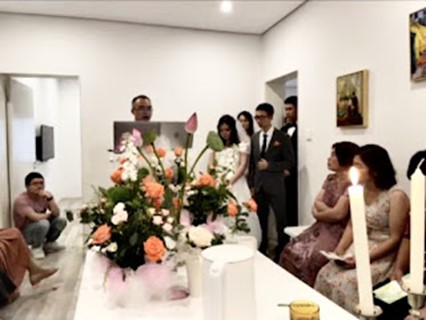 (Chengdu, Sichuan Province—August 31, 2021) Zhang Fan, a Christian who attends Chengdu Early Rain Covenant Church (ERCC),* initially scheduled her wedding for the afternoon of August 28. Because of Sister Zhang’s affiliation with Chengdu ERCC, however, Chinese Communist Party (CCP) authorities repeatedly harassed owners of venues she leased; forcing her to terminate the contracts for three locations and hold her wedding at home.Prior to Ms. Zhang’s wedding, planned for the afternoon of August 28, the owner of the first venue she had reserved phoned her and said, “You cannot use my shop for your wedding. You have to find a new location.” Sister Zhang then contacted another shop owner and signed a new lease for her wedding venue. Police officers also harassed this shop owner, causing the owner to likewise void this contract. The next morning, Sister Zhang contacted the owner of the Chengdu Juranzhijia Glaze Shop who agreed she could hold her wedding there. Nevertheless, CCP police officers again threatened the shop owner who voided the contract. This forced Ms. Zhang to again change her wedding venue. Disappointed and sad, Ms. Zhang posted the following on her WeChat Moments:

I am a Christian who planned to hold my wedding at Chengdu Juranzhijia Glaze Shop. Due to police officers’ pressure, the owner just told me that I cannot be married there.

Now, it is raining in Chengdu, and I don’t know what to do. Ultimately, due to police officers repeatedly foiling Sister Zhang’s efforts to secure a venue for her wedding, she decided to hold the ceremony in her home. Despite her house's small size, causing many fellow Christians to have to celebrate with her online, and even with the CCP repeatedly disrupting her venue, Sister Zhang’s wedding turned out to be peaceful, moving, majestic, and memorable.

Satan, you should know: Christ has conquered the world… If God be for us, who can be against us? God has made a covenant with us. Satan should watch out….

If God be for us, who can be against us? (Romans 8:31) Today’s wedding was disrupted three times, but: The Lord has done it this very day; let us rejoice today and be glad. ~ Psalm 118:24

Praise God in His sanctuary;

Praise Him in His mighty firmament!

Praise Him for His mighty acts;

Praise Him according to His excellent greatness!

Praise Him with the sound of the trumpet;

Praise Him with the lute and harp! ...