Vietnam (CAM) — Earlier this year a husband and father in northern Vietnam was released from prison, where he had served more than two years – and not for the opium-smoking so popular in his village.

Thuan* had grown up surrounded by friends and neighbors who routinely got drunk and smoked opium. So he was surprised when, invited to a local missionary’s house for dinner with Christians in another village a little over two years ago, he found them somehow warm, fun and friendly even without opium.

“He had heard the Gospel from the local missionary, Pastor Dang*, many times, but he didn’t like hearing it, because in his village there was not one Christian, and people liked to get drunk and smoke opium every day,” the leader of the native ministry said.

After dinner, Thuan accepted Pastor Dang’s invitation to visit his house church in the village, which was about 20 miles from Thuan’s home.

“Thuan heard the Gospel from Pastor Dang, and he received Christ,” the leader said.

“When Thuan went back to his village, his life was changed, and his wife and children went with him to the house church in the other village to hear the Gospel. After the worship time, his family received Christ, too.”

Thuan shared the Gospel with three other families in his village, and they too made the trip to Pastor Dang’s Sunday service and joyfully put their faith in Christ, the leader said. As Pastor Dang’s church was too far away to visit every Sunday, the 17 new Christians of the four families began worshipping in their own village at Thuan’s home.

Three Sundays passed before police officers arrived at Thuan’s home. Pointing out that there had not been one Christian among the village’s worshippers of nature and ancestors, the policemen asked them, “How did you become Christians? Who told you about Christianity? Why did you convert?”

Thuan told them the province was home to hundreds of home fellowships and long-established churches, and that there were thousands of Christians who had been worshipping for decades, so why couldn’t they? The officers said they did not have permission to worship at Thuan’s home, and that they had to go to a church recognized by the government.

“They then went to Pastor Dang’s house church every Sunday morning, but the old people and the children couldn’t go because it was too far away for them,” the ministry leader said. “So they continued to gather for worship at Thuan’s house, and he was sharing the Holy Bible with them. The policemen and many people in their hamlet came and destroyed their houses, taking everything – motorcycles, rice, pigs, goats, cows, and kicked them out of the hamlet.”

The four families scraped together materials to set up tents in the jungle. Christian leaders reported the illegal expulsion to high police and federal religion officials. After the families had lived three months in the wilderness, local policemen came to their campsite and said they could safely return to their village, the ministry leader said.

“When they came back to the village, they continued to gather to worship the Lord in Thuan’s house,” the leader said. “So Thuan was put in prison, sentenced to 26 months in prison camp. He was released last month.”

Vietnam’s 2018 Law on Belief and Religion criminalizes faith-based activities that the government has not approved in advance, thus eliminating a gray area in which house churches had been largely tolerated.

The religion law not only makes many fellowships illegal but is used to prohibit church leaders from making visits to homes to lead services, according to the U.S. State Department.

The law has forced smaller, informal fellowships to combine into single, large, officially registered churches that the government can more easily monitor and manipulate, Christian leaders say. Among other intrusions, the law forces religious groups to report on routine activities like festivals and conferences. 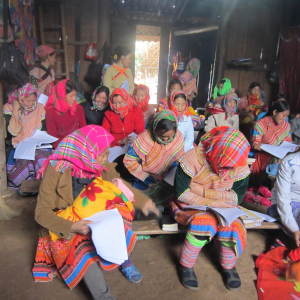 The Lord continues to expand His kingdom as local missionaries bring the message of eternal life to their own people. In a country where folk religion and atheism have long held sway, 115 people from seven unreached ethnic groups recently put their faith in Christ.
(Photo, caption courtesy of Christian Aid Mission)

Earlier this year, police prohibited Christians from worshipping in house churches in two other provinces and harassed pastors, the ministry leader said.

“There were many problems for the four pastors and 51 Christians belonging to the house churches in these provinces,” he said. “Police came and stopped their Sunday morning worship and summoned the pastors to the police station many times.”

Treatment of refugees who become Christians also can be heavy-handed. When 11 refugee families in one village received Christ earlier this year, police told them to move to another province because local council members wanted their community free of Christians, the ministry leader said.

When the Christians continued to meet, police took their Bibles and hymn books, saying they were not allowed to have such books published in their ethnic language, only photocopied. Officers also forced them to do yardwork at the village office every Sunday in order to keep them from gathering for worship, the leader said.

“All the Christians decided to move away,” he said.