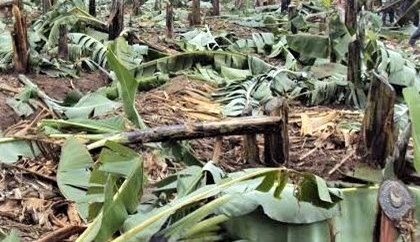 NAIROBI, Kenya (Morning Star News) – A Christian woman and her children last week fled the violence of her Muslim husband in eastern Uganda, and earlier in a nearby district villagers destroyed a newly believing family’s crops and drove them from their home, sources said.

Aisha Nambeya, 27, and her five children ages 9 to 2, fled their home in Busalaamu village, Bukanga in Luuka District after her husband found her with a Bible and beat her on Dec. 20, she said. Nambeya said she had put her faith in Christ days before.

“In a dream on midnight of Dec. 17 I saw a man with white clothes who introduced himself to me as Issa [Jesus],” Nambeya told Morning Star News. “He showed me two paths, one leading to good life and another one leading to destruction.”

The Christ figure did not let her ask questions, she said.

“When I woke up, I was very fearful and trembling, and early in the morning I was so restless that I went to see a Christian neighbor and shared the dream with her,” Nambeya said. “She advised me to see a pastor near Iganga District.”

Her husband, Yazid Magera, was away on business, giving Nambeya the opportunity to visit the pastor, whose name is withheld for security reasons. She told him and a few church elders about her dream, and the pastor told her it was Christ inviting her to salvation, she said.

“Without much hesitation, the conviction was so much that I asked the pastor to pray for me,” Nambeya said, adding that she then put her faith in Christ.

“Immediately a big burden rolled away from my heart, and great peace settled in my heart,” she said. “The pastor then continued sharing with me the new life of following Jesus and thereafter gave me a Bible and some verses to be reading.”

He advised her to be careful about reading the Bible in front of Muslims, to put the Bible in a secret place and to ask her husband about Christ to gauge his reaction, she said.

When Magera arrived home on Dec. 20, she kept her faith secret but began reading the Bible after he left for work. Nambeya said she fell asleep in the afternoon with the Bible nearby.

“My husband arrived at 4 p.m. while I was still asleep and found me with the Bible,” she said. “He was furious and wanted to know who gave me the Bible. I would not disclose it even after him beating me up.”

Magera slapped her and struck her on the back and head with a stick, leaving her with swelling near her ear, she said. When he left at about 5 p.m., he told her that when he returned she must tell her everything, including who gave her the Bible, she said.

“As he left, I knew I was going to have serious problems, so I decided to take all my small children to the church,” she said. “The church quickly relocated us to another place. We left everything back at home and managed to come with only a few clothes. We need prayers for help from God.”

Opoloto and his family had put their faith in Christ the previous day, he said. After listening to an evangelist at an open-air event on Dec. 10, Opoloto invited him to dinner at his house on Dec. 11, he said.

“I was touched with the preaching of the pastor because he was using the Koran and Bible, yet some of our sheikhs had talked bad of Jesus as a lower prophet than Muhammad,” Opoloto told Morning Star News by phone. “I wanted to know the truth of what he was preaching, so I invited the pastor for supper at my house. That very evening, I and my entire household gave our lives to Christ as Lord and Savior.”

Area Muslims called for mosque prayers at 10 a.m. on Dec. 12, a Sunday, a very unusual time to do so, said a neighbor whose name is withheld for security reasons.

“Thereafter I saw a huge number of Muslims chanting his name, ‘Umar, Umar, Umar,’” the neighbor said. “I then rang him to alert him so as to save his family.”

Opoloto managed to escape before angry Muslims broke into his home with machetes, sticks and stones, the neighbor said.

“They broke into the house but could not find anyone inside,” he said. “They destroyed some of the property then went ahead and started destroying his cassava, banana plantation and livestock, shouting the name of Umar, saying he has blasphemed Islam and the Islamic community.”

Opoloto, his wife and eight children have taken refuge at an undisclosed location.

“For me and my family, we have given our lives to Christ, which is worth more than the loss of our property,” Opoloto said.

The assaults in Luuka and Pallisa districts were the latest of many instances of persecution of Christians in Uganda that Morning Star News has documented.