Thousands of civilians displaced by conflict in Myanmar are at risk of starvation because of roadblocks enforced by the Myanmar military (also known as the Tatmadaw).

A Kayah aid group estimated that more than 10,000 people sheltering from Tatmadaw attacks in jungle areas on the border between Shan and Kayah states are running out of food because the flow of goods through a regional hub at Mobye in Shan State has been cut off by the army.

“Food supplies aren’t getting through because of roadblocks,” said an aid worker. “We can’t buy food even if we have money and we are facing a severe shortage. Additionally, the weather is very cold and we need blankets.” 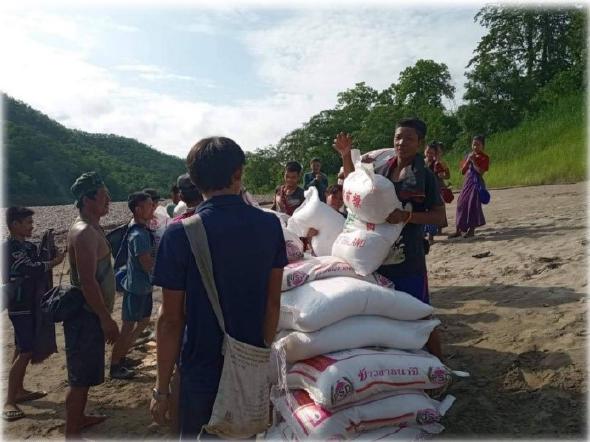 Christians in Myanmar have been forced to take shelter in the jungle because of Tatmadaw attacks. Barnabas has sent food and practical aid to help them

A driver said that soldiers have begun checking trucks heading to Kayah on a route via Aungban in southern Shan and are only letting them through in exchange for bribes.

“Cars can get through much easier, but still [troops] ask if they are carrying any food or other things,” said the driver.

“The trucks in front of us were stopped because they didn’t give [the soldiers] money.”

Local aid workers estimate that 170,000 people were displaced by military violence in the nine months up to the end of February 2022 in Kayah State, which has a large Christian presence mainly among the ethnic Karenni population.

They say Tatmadaw soldiers have killed at least 221 civilians and arrested 220 people in the state since the military seized power in a coup on 1 February 2021.

The Tatmadaw has for many years persecuted the Christian-majority Chin, Kachin and Karen ethnic groups, as well as the large Christian communities in Kayah and Shan states, and the Muslim-majority Rohingya.

Cry out to the Lord to intervene and enable food to reach the thousands of displaced people in Myanmar. Pray that supplies sent by Barnabas will get through unhindered to Christians taking shelter in even the least accessible areas.