Three children in the same family were killed by an artillery shell in the village of Le Htwel, Kayah State, on the afternoon of 8 March.

The siblings, brothers aged 7 and 10 and their 12-year-old sister, died instantly in the attack on the village close to the state capital Loikaw, according to a local community spokesman.

He added that the siblings’ father and 15-year-old sister sustained injuries from the shelling. 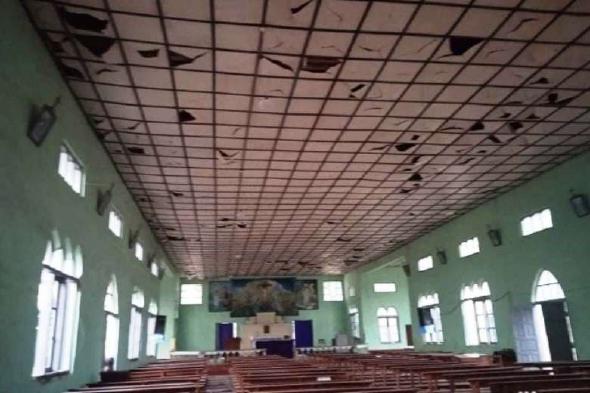 The damaged ceiling of a church in Demoso township, Kayah State following an airstrike on 8 March [Image credit: UCA News]

Residents believe the shell to have been fired from a military unit stationed in their area, which is completely under control of the Myanmar military (also known as the Tatmadaw).

Earlier the same day a church in the nearby village of Saun Du La, Demoso township was severely damaged in an airstrike.

The bombing at around 2am caused severe damage to ceiling and windows.

A local Christian leader decried the “deliberate and planned attack” on the church, in view of the lack of any ongoing conflict in the area.

Several churches have been hit by Tatmadaw airstrikes and artillery shelling in the Loikaw area since May 2021. Four people were killed in one attack on the village of Kanyantharyear on 23 May.

According to the Karenni Human Rights Group, 32 have died in military attacks in Kayah State since the start of January.

The Tadmadaw, which seized power in Buddhist-majority Myanmar in a coup on 1 February 2021, has for many years persecuted the Christian-majority Chin, Kachin and Karen ethnic groups, as well as the large Christian communities in Kayah and Shan states, and the Muslim-majority Rohingya.

Ask the Lord to comfort the family mourning the loss of the three siblings and enable them to draw strength in Him. Pray for an end to attacks on Christians and churches in Kayah State and other regions of Myanmar.