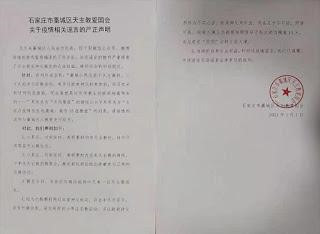 On January 7, The Catholic Diocese of Shijiazhuang denied rumors and issued an official statement: “The spread of these rumors has seriously violated the lawful rights and interests of Catholic priests and members, it undermined the harmony and stability of the society.” The Diocese of Shijiazhuang clarified: “As of today, among the confirmed cases in Shijiazhuang, only one of them is a Catholic believer.”

Officials from the Beijing Bureau of Ethnic and Religious Affairs stated that 155 venues used for religious purposes in Beijing would be temporarily closed to the general public and collective religious activities will be suspended. NBC News reports that to prevent the spread of the new coronavirus outbreak, the Chinese Communist Party (CCP) authorities locked down 11 million people in Hebei Province.

It took just 39 new coronavirus cases for health authorities in China to put almost 11 million people into lockdown in the city of Shijiazhuang.

Health officials took no chances on Wednesday, sealing off the capital of the industrial Hebei province and ordering a mass testing drive.

Travel restrictions were put in place in the remainder of the region, which encircles China's capital Beijing and is home to some 76 million people.

By Saturday, Mayor Ma Yujun told a news conference that it had taken just three days to complete the first round of mass testing in Shijiazhuang, with 354 people found positive for the virus. A second round of testing is due to begin soon, he added.

Authorities put Hebei — known for textile, steel and pharmaceutical industries — into a "wartime mode" on Tuesday. This meant that government-coordinated action could begin, investigation teams to trace contacts could be set up and medical supplies distributed.

For residents of the provincial capital, Shijiazhuang, travel out of the city was barred and gatherings banned. Schools were closed down, while flights and trains were cancelled and the main bus terminal shut.

Late Friday, citizens were urged to stay home for at least seven days.

Nearby, officials in the city of Nangong announced on the social platform WeChat that they would offer rewards of 500 Yuan ($77) for reports of anyone refusing a Covid-19 test.

On January 8, “Health Daily,” a newspaper agency the CCP State's official newspaper People's Daily, reported that the source for confirmed cases evolved from the frequent participation in wedding banquets and centenarians’ banquets. The trajectory of confirmed cases also appeared to describe “participating in activities.” Chinese social media WeChat and Weibo have spread false statements, including:

One social media WeChat public account with the ID, “Qi Feng Lu Gu,” posted the rumor “Shijiazhuang Gaocheng, where the epidemic occurred, spread across 15 churches.” This falsely linked the spread of the epidemic to Gaocheng Catholic Church.

As Beijing fights the new COVID-19 epidemic, it may simultaneously use the outbreak as an excuse to strengthen its control over venues used for religious purposes. Beijing will also carry out various investigations on unregistered religious activities in rural areas of the city, stating that it will keep “violations of laws and regulations” in check.

Meantime, the CCP has indefinitely restricted religious activities in Hebei and Beijing.

As it attempts to clarify the rumors blaming local Catholic church members for “participating in activities,” the Catholic church reported its response to the rumors of the epidemic to police. They also reserve the right to pursue legal actions against the rumor makers who speak "deceit."

He who speaks truth

But a false witness,