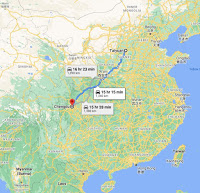 Road from Chengdu to Taiyuan.

The Chinese Communist Party (CCP) appears to be ramping up its persecution of Xuncheng Reformed Church, a church planted in Taiyuan (the capital of China's northern Shanxi Province), by Early Rain Covenant Church (ERCC), located in Chengdu (the capital of China's southwestern Sichuan province). Long-time friends, Xuncheng Reformed Church Pastor An Yankui and his co-worker Zhao Wikai (35), studied theology together in a seminary in Chengdu, founded by ERCC's Pastor Wang Yi (48). In May 2018 Wang Yi openly spearheaded Christian resistance against CCP repression [see RLPB 483 (12 Dec 2018)]. On 1 September 2018, Pastor An became one of 198 pastors to sign Pastor Wang Yi's 'Public Joint Statement'. Arrested and jailed in December 2018, Pastor Wang Yi is currently in failing health; observers fear that the CPP is engineering Wang's 'medical deterioration' [see RLPB 604 (30 June)]. Like Chengdu's ERCC - and possibly due to its close relationship with ERCC, and Pastor An's signature on the 'Public Joint Statement' - Xuncheng Reformed Church is experiencing escalating persecution. This is what happens when you resist the CCP; you get thrown into the fiery furnace.

On Sunday 15 November 2020 officials raided Xuncheng RC during worship [video]. They detained Pastor An Yankui, his wife Yao Congya and five other members, and issued the church with a disbandment notice. At the police station, the detained believers were handcuffed, forced into prison clothes and locked in a cell. They were eventually released at 9:30pm after hours of interrogation. Pastor An and Yao have two children. Then, on 30 December, at around 10:45 pm, 'approximately three dozen security agents' raided Pastor An Yankui's home Bible study. They confiscated the church's choir robes and Christian books, and detained Pastor An and five female church members, leading them away in handcuffs. While the women were released later that evening, Pastor An was forced to serve a 15-day administrative detention (i.e., one in which no charge or trial is required). He was released on 16 January.

Pastor An's long-time friend and ministry co-worker Zhao Wikai and his wife Li Xin have three young children. To give their children a Christian education and protect them from atheistic, CCP indoctrination, Zhao and Li home-school their children. Like unregistered worship, home-schooling is officially illegal in China. It is also illegal to teach religion to minors (defined in Chinese law as those under the age of 18). At 7am on 17 May, some 20 police stormed Zhao's home, seized him and took him away. Despite not having a warrant, they confiscated computer equipment and numerous books, without making an inventory of property taken. At around noon, when they had finished raiding and searching the house, the police took Li to the station. Whilst Li was released later that evening, Zhao was forced to serve a 15-day administrative detention, ostensibly for 'proselytising' his own children. On 20 May, when Li, Pastor An and Zhao's lawyer, Deng Qinggao, tried to visit him in the Lishi Detention Centre, they were denied access on the grounds that the case was 'classified' and involved 'national security concerns'. Zhao was released 15 days later. Despite being arrested for 'proselytism', Zhao's interrogators seemed mostly interested in the church.

At 8am on 7 July Zhao was summoned again. China Aid Association reports that later in the day, despite not receiving a formal detention notice, the family heard that Chinese Communist Party (CCP) officials had criminally detained Zhao on the charge of 'illegal holding of materials promoting terrorism and extremism'.

Finally, be strong in the Lord and in the strength of his might. Put on the whole armour of God, that you may be able to stand against the schemes of the devil. For we do not wrestle against flesh and blood, but against the rulers, against the authorities, against the cosmic powers over this present darkness, against the spiritual forces of evil in the heavenly places ... (from Ephesians 6:10-18 ESV).

Prime Minister Abiy Ahmed's Prosperity Party has won the 21 June elections, securing 410 of 436 seats in the federal parliament where elections were held. No voting occurred in Tigray on account of conflict, and Oromo opposition parties boycotted the polls. Polling delayed due to insecurity will be held in September. Polling will be re-run in 10 constituencies. The election was peaceful despite concerns it might be chaotic or marred by violence [see analysis by Gregory Copley, President, International Strategic Studies Association, from Addis Ababa (24 June).] While PM Abiy now has a mandate to advance reforms, opposition will remain fierce.

The Battle for Ethiopia pits the Ethiopian government's vision of a strong, united and prosperous Ethiopia against ethno-nationalists who - with backing from Egypt and the Sudanese military - would tear Ethiopia apart. Whilst ethno-nationalism might empower some – e.g., the TPLF and Oromo ethno-nationalist including Islamist Jawar Mohammed - it would trigger civil war, ethnic cleansing, gross insecurity, regional instability and a Christian crisis of monumental proportions.