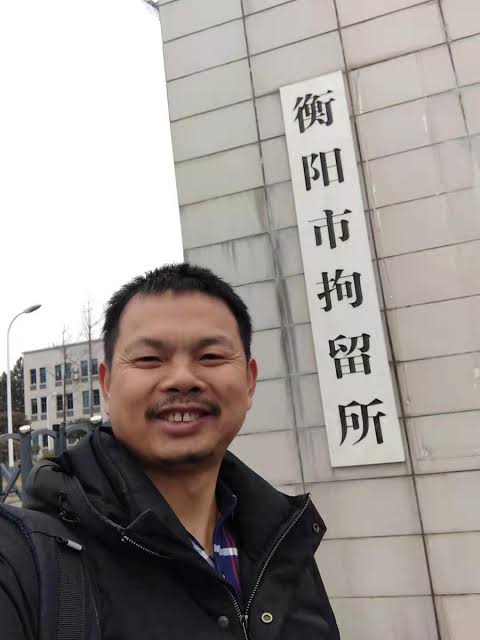 Chen Wensheng at the entrance of the detention center
(Photo: ChinaAid resource)
(Hengyang, Hunan Province—July 13, 2021) After Zhejiang Province State security officers arrested Chen Wensheng, a Christian from Hengyang City, Hunan Province, Brother Chen on June 19 and transported him back to Hengyang, Chinese Communist Party (CCP) authorities held Brother Chen under designated residential surveillance at West Lake Resort for 20 days. While leaders of the Bureau of Ethnic and Religious Affairs, the State Security Department, and other related departments detained Brother Chen, they continuously communicated with and interrogated him, trying to persuade him to stop proclaiming the gospel on the streets.
After releasing Brother Chen, CCP security officers continued to communicate with him, particularly from the evening of July 7 until after 12 am on July 8,. The fact that State security officers knew where he had preached the gospel during the past two decades surprised Brother Chen.
Authorities even knew the year Brother Chen traveled to Xinjiang, as well as the time he visited Inner Mongolia, when to northeastern China, and when to Hainan Island. Authorities had also noted the names of individuals who traveled with him. State security officers had even documented that once, Brother Chen and four other Christians who accompanied him had passed through numerous counties on their way to Tibet to preach the gospel. When members of the group held a cross and shared the gospel in Tibet, Lhasa police arrested and deported them from there.
During their communications, Brother Chen learned that State security officers knew that after sharing the gospel in various parts of China, he and three other Christians had traveled to Vietnam to preach. Police in Vietnam arrested them, however, and deported them to China.

Thank God for the CCP’s thorough knowledge on the fact that I go to different places to preach the gospel. They recounted my record as if they were enumerating the heirlooms of their own family. Authorities also told me that by 2021, I had been to other regions to proclaim the gospel more than 1,000 times. 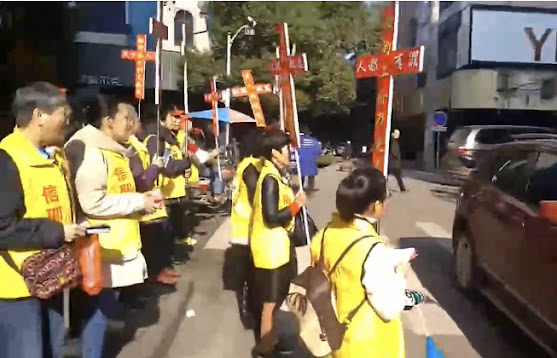 Chen Wensheng preaching the gospel on the streets with other Christians from the Church.
(Photo: ChinaAid video screenshot)
State security officers showed news stories overseas media had covered to Brother Chen. “Why are photos of you preaching the gospel available on anti-China websites?” several officers asked.
“I have no idea who spread this,” Brother Chen said. He then asked several State security officers to find out the name of the person who had shared the photos.

State security officers assert that a team of lawyers have been backing Brother Chen and planning things behind the screen. Brother Chen responded to officials by quoting the Lord Jesus’s promise in the Scripture from the book of Luke: “For I will give you words and wisdom that none of your adversaries will be able to resist or contradict.”

On the morning of July 8, while going to have breakfast, Brother Chen insisted on wearing a hand-made gospel badge, which State security officers had ultimately allowed. Words on the badge state, “Chen Wensheng, the slave of the Holy God, the servant of Jesus Christ, the worst of sinners, sent to preach God’s word.” While eating breakfast, Brother Chen handed out gospel fliers to friends at his table. “It would be profitable if I could wear a “gospel commissioner” badge while having breakfast,” he said. 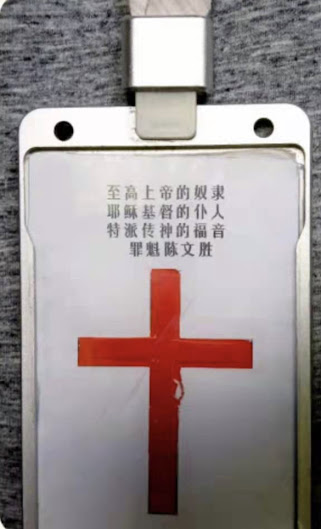 I am so thankful that the guards showed mercy to me this time. Thank God for their thorough love and care... that I experienced the special treatment of ‘the gospel commissioner of God’s kingdom.”

May my God have mercy on them, and grant them faith so that they will respond to my Lord Jesus’ salvation… In the Lord’s holy name... Amen.

###
Therefore settle it in your hearts
not to meditate beforehand on what you will answer;
for I will give you a mouth and wisdom
which all your adversaries
will not be able to contradict or resist.
You will be betrayed even by parents
and brothers, relatives and friends;
and they will put some of you to death.
~ Luke 21:14–16 (NKJV)
China Aid exposes abuses in order to stand in solidarity with the persecuted and promote religious freedom, human rights, and rule of law. If you wish to partner with us in helping those persecuted by the Chinese government, please click the button below to make a charitable donation.