(Guiyang, Guizhou Province—July 16, 2021) Recently, as a Guiyang City house church held a memorial service for an elderly Christian at a local funeral home Chinese Communist Party (CCP) officials raided the venue, and forcibly confiscated religious memorabilia. After changing the arrangements the senior’s family had made, prior to invited guest arriving, CCP authorities removed the tablecloth imprinted with the symbol of a cross, and insignia, “God loves people,” “Rest in peace,” etc. Officials banned praying, singing hymns, and reading the Scriptures from the service. 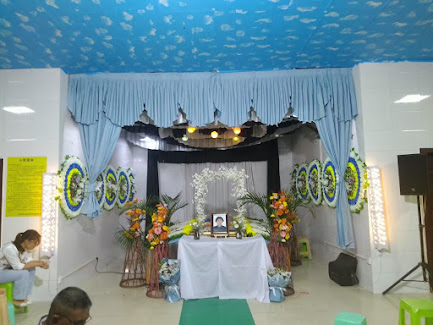 The memorial service venue after CCP authorities confiscated religious memorabilia. memorabilia.
(Photo: ChinaAid resource)
In Guiyang, one city increasingly persecuting Christians over the past few years. CCP officials have cracked down on, and regularly demolished house churches. Authorities have also raided Sunday worship services, as well as homes of pastors, elders, and Christians, arresting many who profess faith in Jesus. This raid, however, the first case where authorities forcibly raided a memorial service venue, indicates the CCP’s escalating suppression on Christianity and house churches.

Dissimilarly, while intensely cracking down Christianity, CCP authorities approve local customs/practices of Buddhism and Daoism, which include clanging gongs and beating drums, as well as burning incense, and kowtowing,* and accepts them. One Christian professing to have been a Christian for 20 years, who had attended several dozens of memorial services held either in the urban or rural area, had never witnessed CCP authorities forcibly confiscate religious memorabilia, nor of them maliciously raiding, razing, and ruining a memorial service venue.

*worship or submissive practice, kneeling and touching the ground with one's forehead as part of Chinese custom

#
When He avenges blood,
He remembers them;
He does not forget
the cry of the humble.
~  Psalm 9:12 (NKJV)
China Aid exposes abuses in order to stand in solidarity with the persecuted and promote religious freedom, human rights, and rule of law. If you wish to partner with us in helping those persecuted by the Chinese government, please click the button below to make a charitable donation.