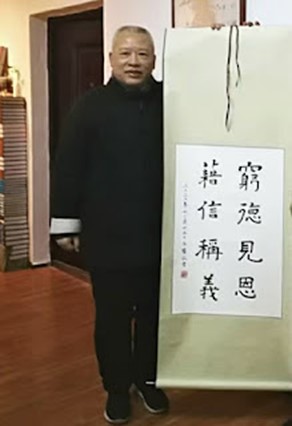 (Guiyang, Guizhou Province—January 12, 2022) During the afternoon of January 5, according to Ms. Yang Aiqing, wife of Guiyang Renai Reformed Church’s Elder Zhang Chunlei, Chinese Communist Party (CCP) officials allowed Elder Zhang’s lawyer to meet with him in the detention center. His lawyer previously visited him half a year ago on June 19, traveling to the detention center several times to request visitation. Authorities repeatedly rejected the lawyer's requests.

During the most recent visit, the lawyer noted that his client was peaceful. Elder Zhang Chunlei sang a hymn during the visit despite his imprisonment, and he asked his lawyer to help him greet Churches. Elder Zhang’s case has been transferred to Guiyang City People’s Procuratorate. On the evening of March 16, 2021, when Elder Zhang arrived at the local police station to check the status of several arrested Christians of his Church, officers unexpectedly detained him. The following day, CCP authorities ordered that Elder Zhang be administratively detained for 11 days. Afterward, officials criminally detained him for an additional 37 days. On May 1, at the end of his detention period, CCP authorities formally arrested Elder Zhang under the charge of suspicion of “fraud.” At the time of reporting, no trial has been held. Guiyang City CCP authorities heavily persecute Guiyang Renai Reformed Church, a house Church. When police raided Renai Reformed on March 16, 2021, officers searched the houses of many ministers and Christians and arrested ministers and congregants. This attack depicts yet another major persecution against house churches like the massive crackdown against Chengdu Early Rain Covenant Church on December 9, 2018. Since the new “Regulation on Religious Affairs” took effect in early 2018, some house churches refused to abide by the CCP’s unconstitutional articles of law, as many articles infringe on religious freedom. To hold the authentic Christian faith, Chengdu Early Rain Covenant Church’s Pastor Wang Yi launched his “Joint Statement: A Declaration for the Sake of Christian Faith” campaign. As one of the 458 pastors supporting the campaign, Elder Zhang signed Pastor Wang’s statement. As CCP authorities have raided, persecuted, and banned numerous house churches, national security agents have invited more than half of those pastors to “talk.” On December 9, 2018, CCP officials launched a massive crackdown against Chengdu Early Rain Covenant Church. Authorities arrested more than 100 Christians, including Pastor Wang Yi, elders, deacons, with Church co-workers. Guiyang Renai Reformed Church’s Elder Zhang, Guiyang Huoshi Church’s Pastor Yang Hua, and Beijing Shouwang Church’s Pastor Jin Tianming posted statements that they are willing to suffer the same punishment that authorities had inflicted on Pastor Wang. Before police arrested him, Pastor Wang posted a similar statement saying he would willingly suffer the same punishment as other persecuted pastors. During the Sunday service on May 12, 2019, CCP authorities raided and banned Guiyang Renai Reformed Church. In the past, Elder Zhang served as an official of the Guizhou Provincial Department. Because of his Christian faith, he left his government job and became a full-time servant of his Church. Several other Christians of Renai Reformed also worked as government officials in the past. On April 6, 2021, Elder Zhang met with his lawyer in the detention center, he told him that he never had so much sleep. He found the detention center to be a good place for him to rest. On April 14, 2021, Elder Zhang’s lawyer met with him again in the detention center, and brought back copies of the following two poems Elder Zhang had written while imprisoned:

Cross on the prisoner’s shoulders, working hard under a yoke.

The spring is fading away, but the days are still cold.

Thanks to my living God, prison becomes my threshing floor.

Locked in the deep yard, metal bars block the cloud.

Free from the prison in the dream, see my wife and kids growing flowers

Blessed to be called by God, despite the dangers on the way of cross.

All saints bear their yokes, focusing their purpose on Zion.

On May 10, 2021, Elder Zhang met once more with his lawyer in the detention center. He told him that he has transitioned from worry and uncertainty to fully surrender and trust in God. Through his continuous prayers, he said that God revealed special messages to him. He encouraged Christians not to stop gathering for God. He also asked his lawyer to send the following message to brothers and sisters of his Church:

The Holy Bible tells us not to stop gathering.

Whatever the circumstance, never stop gathering.

Regarding his own situation, Elder Zhang believes God never does things wrong. Elder Zhang said that he will not regret taking a stand for freedom; for what’s right. He said, “I will follow God’s will, and fully trust Him.” When talking about the fabricated “fraud” charge against him, Elder Zhang said:

There is nothing wrong for our Church to receive Christians’ offerings. Our Church conforms to the Holy Bible’s teaching. Churches throughout the world do the same thing (accept offerings). I don’t think I committed any crime. I’m not resentful. I love the police officers, national security agents, procurators, and our country. I will keep praying for them.

On June 4, 2021, when Elder Zhang’s lawyer again met with him in the detention center, Elder Zhang had lost weight but remained in good spirits. He said:

I’m ready to sacrifice myself for my belief. I cannot live any minute without God in the detention center. God is with me every minute. I ask my brothers and sisters in Christ to pray for me; to pray for God to lead my way. I firmly believe my God is the Holy Trinity, and His teachings are the authentic Christian belief that has passed down generation by generation for more than 2,000 years. Even if CCP authorities impose the fabricated “fraud” charge against me, I stand strong with my good conscience. Many Chinese lack the fundamental understanding of Christianity, including those police officers and procurators. I hope I have opportunities to share the gospel with them…, to let them know Who Jesus is; how precious the gospel is….

But let judgment run down as waters,

and righteousness as a mighty stream.

He holds success in store for the upright,

he is a shield to those whose walk is blameless,

for he guards the course of the just

and protects the way of his faithful ones.