Praying for a breakthrough - an extended RLPB.
by Elizabeth Kendal

In the words of long-time war correspondent Chris Hedges (27 Feb 2022), 'War is not politics by other means. It is demonic.' Indeed! Doubtless there is nothing the devil loves more than to see human beings - bearers of God's image - killing, butchering and destroying one another.

Video:   Drone footage of the settlement of Borodyanka in the Kyiv region (3 March).

For analyst David Goldman, the scene is all too familiar. Goldman writes (4 March 2022): 'World War I had no good guys and no winners ... There's no hero to cheer, no villain to boo in the first tragedy of the 20th Century, just mediocre and small-minded politicians unable to step back from the brink. All of them [France, Germany, Russia, England] acted rationally in the pursuit of their vital interests, but all the same stupidly as well as wickedly, and the ensuing world wars undid the achievements of a thousand years of Western civilisation. We look back to 1914 in horror, and wonder how the leaders of the West could have been so pig-headed. Nonetheless, we are doing it again today.' As Goldman explains, politicians in Kyiv, Washington, Brussels and Moscow, could have stepped back from the brink but did not. To say the conflict was not provoked would be disingenuous; but to say the provocation justifies this demonic eruption of death and destruction would be inexcusable. Everything should have been done to prevent this war; instead, the opposite occurred. Now war has erupted, everything should be done to end it. Unfortunately, ending war is something those who profit from war (i.e. desperate politicians; weapons manufacturers, arms dealers, mercenaries, etc.) are loath to do.

Israeli political analyst Ben Caspit is following Russia-Ukraine negotiations along with the mediation efforts of Israeli Prime Minister, Naftali Bennett. According to Caspit (8 March), the negotiations between Russia and Ukraine have been real and serious. 'On the table is a new proposal from the Russians aimed at ending the fighting, awaiting a response by Zelenskyy.' Caspit reports: 'The sides' positions aren't that far apart … but Putin does not intend to compromise.'

What is on the table? As the Washington Post reports (10 March), PM Neftali Bennett's mediation 'has yielded some progress'. President Putin has backed away from his initial demand for 'demilitarisation and denazification' of Ukraine. Of course, it is possible that this was always a strategic overstatement, designed to make Moscow's actual (and original) demands more palatable. As things stand, President Putin is demanding the following: (1) that Crimea be recognised as part of Russia, (2) that the Russian-speaking separatist oblasts/regions of Donetsk and Luhansk be recognised as independent republics, and (3) that Ukraine amend its constitution to enshrine neutrality. Should this happen, then the Zelensky government would remain in place and Ukraine would retain its independence.

Speaking from Kyiv on 7 March, President Zelensky confirmed that he is no longer pressing for NATO membership for Ukraine: 'I have cooled down regarding this question a long time ago after we understood that ... NATO is not prepared to accept Ukraine.' He reiterated this on 15 March, saying: 'For years we've heard about the open doors, but we've also heard that we can't enter those doors. This is truth, and we [Ukrainians] have simply to accept it as it is.' Zelensky also confirmed that Kyiv is open to 'compromise' and ready to 'discuss with Russia' the future of Crimea and Donbas. Pray for a breakthrough in negotiations, and that a ceasefire will be brokered soon for, failing that, the situation will get a whole lot worse.

MUSLIM MERCENARIES FIGHTING ON BOTH SIDES 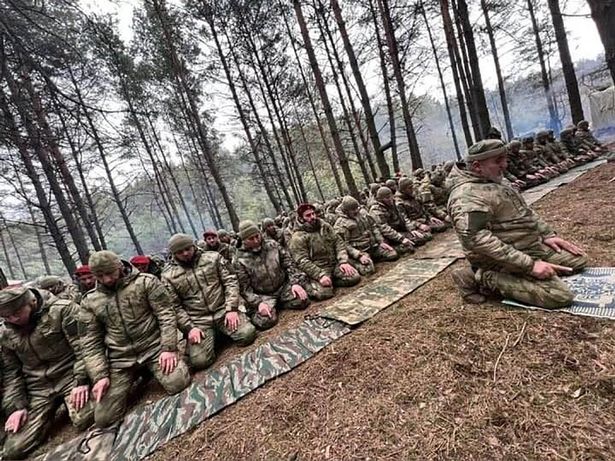 Former Israeli MP Ksenia Svetlova is an expert in Middle Eastern affairs and radical Islam. In a report published on The Media Line (28 Feb), Svetlova reports that Chechens are already fighting on both sides of the conflict. Aslan Doukaev, an expert on the North Caucasus, reports the same in an analysis for Jamestown Foundation's Eurasia Daily Monitor (8 March). As these experts explain, there are essentially three kinds of Chechen fighters: (1) Pro-Russian Chechens under Ramzan Kadyrov (who is paid by Moscow to be loyal), (2) anti-Russian Chechen nationalist separatists under Ahmad Zakayev, many of whom have been living in Ukraine since the end of the Second Chechen War (August 1999 to April 2009), and (3) anti-Russian Chechen jihadists, many of whom have been fighting Russians in Syria for years, some with al-Qaeda and some with Islamic State. Concerning the third group Doukaev writes: 'Interestingly, the Chechen wing of the Caucasus Emirate [which pledged allegiance to Islamic State in 2015] has expressed its support "for the Ukrainian people in their struggle"... [Emir Abu Hamza (Ahmad Umarov)], did not, however, indicate whether the Emirate is planning to dispatch volunteers to Ukraine.'

How this might turn out is anyone's guess. According to reports there is much chatter in jihadist circles about 'whether joining the Ukrainian forces constitutes a legitimate form of jihad ... against the Russian "crusader" enemy'. A worst-case scenario could see Ukraine - already a theatre of US-NATO proxy war - become a theatre for intra-Muslim war and/or an Islamic jihad against Russia, with the West supplying weapons to Islamic jihadists as occurred in Afghanistan in the 1980s. If that were to occur, Ukraine would become a magnet for jihadists. Add to the mix nuclear weapons and unsecured pathogens, and surely no-one would disagree that this demonic war must end as soon as possible.