Editorial: Pakistan’s Christians Are an Example and a Witness to Their Nation

“One could imagine the violent reaction and level of destruction if a non-Muslim was behind such an act.” These were the words of a human rights campaigner after a Muslim man tried to break a large concrete cross on the top of a church building in Lahore, Pakistan.

The man, Muhammad Bilal, sat on top of the cross and rocked repeatedly back and forth.

Having failed to dislodge it, he sat atop the cross for a further half hour, chanting “Allahu Akbar” (God is the greatest). The phrase is a traditional Islamic affirmation, and is often used by jihadists when they attack. 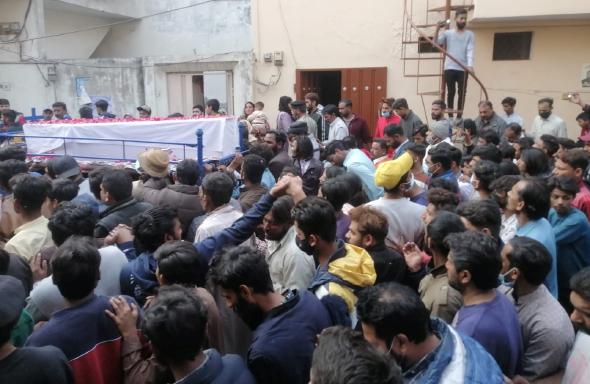 The funeral of Pervez Masih, who was killed by a Muslim mob on February 14 following a dispute in a shop. In refusing to resort to violence when a Muslim man desecrated a church building, Pakistan’s Christians have given an example to their nation.

The Christian community of Green Town – the Lahore district where the incident took place – should be praised for their moderation in responding.

Nobody sought to lay violent hands on Bilal. Nobody in the crowd that gathered in the street attacked him when eventually he jumped down from the church roof. None of the church’s 400 members, nor any of Pakistan’s Christian leaders, have issued death threats.

This response – in line with the teachings of Christ who taught us to “love your enemies and pray for those who persecute you” (Matthew 5:44) – is in stark contrast to the behavior of Islamist extremists within Pakistani society.

Only last month, a mob of more than 150 Muslims attacked and killed a Christian shopkeeper, Pervez Masih, following a petty dispute the evening before.

Had a Christian, or member of any religious minority, behaved towards a mosque as Bilal did towards a church building, there is no doubt that he would have been killed – and perhaps others attacked and killed in the mob reprisals that would have inevitably followed.

Pakistan’s Christians have given an example to their nation, as well as a witness of the grace and peace to be found in the Lord Jesus Christ.