Three Nigerian Christian women kidnapped as teenagers by Boko Haram Islamist terrorists from a school in Chibok eight years ago have been found.

They were recovered with their children by the Nigerian Army during operations against Boko Haram in Borno State between June 27 and July 25.

Ruth Bitrus, 24, and her child were rescued from the terrorists’ Ukuba camp in Sambisa Forest. Hanatu Musa, 26, and her two children, and Kauna Luka, 25, with one child, were recovered in Bama Local Government Area. 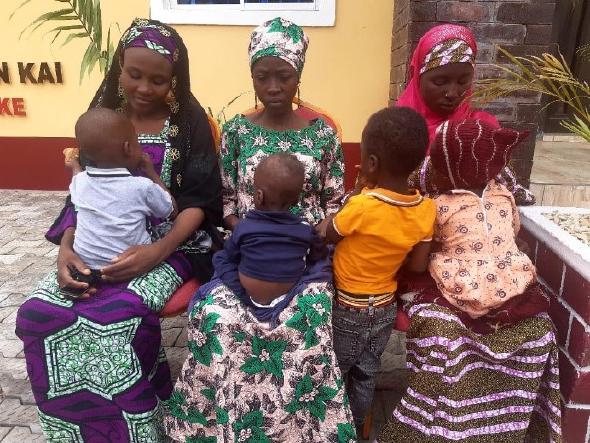 The three rescued women with their children [Image credit: Vanguard]

Major General Waidi Shaibu said that the women and their children were given medical check-ups and treatment. Arrangements are being made for them to be reunited with their families, he added.

Reporters said the women looked traumatized and thanked the military for their rescue.

Boko Haram abducted 276 girls, mostly Christian, from the Government Girls Secondary School, Chibok in April 2014. Around 165 girls have subsequently escaped, been rescued or released. Girls reported being whipped by their captors to force them into marriage, while a group of Christian girls experienced a mock execution for refusing to convert to Islam.

In June 2022 the military recovered two other women kidnapped from the Chibok school. One of them, Mary Dauda, revealed they were starved and beaten by their captors, adding, “I’m so happy to be back.”

Pray for healing and comfort for Ruth, Hanatu and Kauna that they will recover fully from the trauma of their captivity. Ask that they will be reunited with their families and that their needs, and the needs of their children, will be met. Pray that the Chibok women still held by the kidnappers will be released soon.