Burkina Faso – a country long known for its communal harmony and religious openness – is 63.2 percent Muslim (mostly moderate Sunnis), 31.5 percent Christian (mostly Catholic), 4.2 percent African Traditional Religions, and one percent ‘other’ [2018 estimate]. Terrorism spilled into the country from Mali in 2015. After taking hold in the north, terrorist groups spread into the east [RLM, 23 May 2019], from where they are now pressing south into the Gulf of Guinea littoral states. Authorities in the capital Ouagadougou admit that 40 percent of the country is outside government control (Fides, 6 July). Al-Qaeda affiliate Jama’at Nasr al-Islam wal Muslimin (JNIM) [Group for Supporters of Islam and Muslims] and Islamic State in Greater Sahara (ISGS) are both well established in the country. 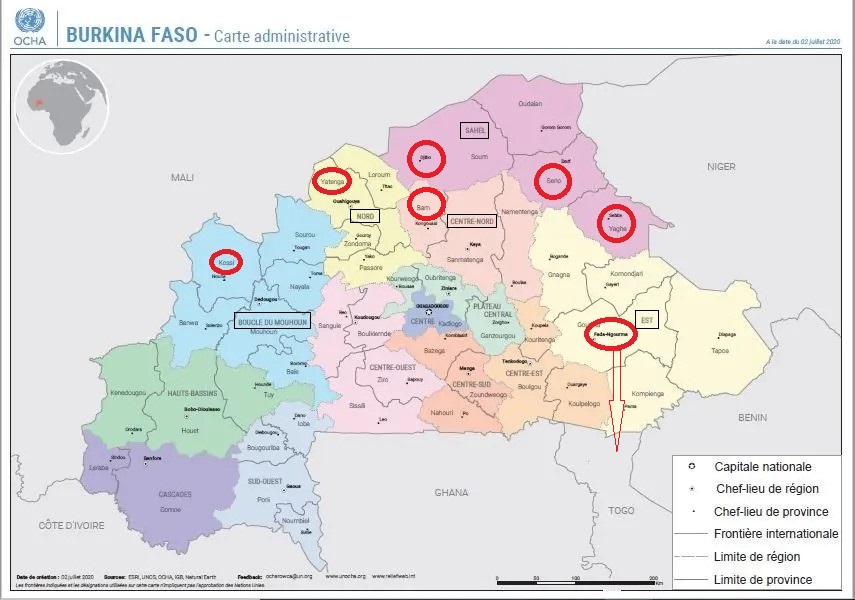 The military coup of January 2022 has not had the desired effect of improving the situation. On the contrary, security continues to deteriorate. Terrorists continue to radicalise and recruit Muslim youths by tapping into their frustrations and discontent. Increasingly, they are targeting civilians, especially civilian members of the government-backed Volunteers for the Defense of the Fatherland (VDP). The latest massacres occurred on 3 July, when 22 villagers were killed in Bourasso department, Kossi Province, Boucle du Mouhoun Region (north-west) and 12 villagers were killed in Namissiguima department, Yatenga Province, Nord Region (north). Dozens were wounded. On 14 June, 80 civilians were massacred in Seytenga town, Seytenga department, Séno Province, Sahel Region (far north) in an attack claimed by Islamic State in Greater Sahara (ISGS). The insecurity has generated a full-blown Christian crisis.

Father Pierre Balima is a Burkinabe priest and student in Pastoral Liturgy; he serves the Parish of Djibo in Burkina Faso’s Sahel Region. He told Fides (29 July): ‘The situation in the country continues to worsen ... It is no longer possible to go to the villages to celebrate the Eucharist and the other sacraments, [for] the roads are impassable due to the terrorists. Pastoral care is destabilised. Many catechists have had to flee … The terrorists continue with the kidnappings and executions of influential people (priests, catechists, religious leaders, teachers, administrators); [they] frighten the population with verbal threats and kill all those who do not obey. Often they break into Christian places of worship during celebrations, forcing them to leave Christian practice to embrace the Muslim religion … two [churches] were burned … several young people were kidnapped. Almost all schools, outside the big cities, are closed. Three priests were killed. Fr Joël Yougbare, a priest of my diocese was kidnapped three years ago [see RLM, May 2019] and there has been no news since then … Given the serious danger we run, we have been asked to close the parishes. The proposal was rejected by the bishop and all the priests. We continue our mission, even if with many limitations.’

A report prepared by the Diocese of Fada N’Gourma, Gourma Province, Est Region (east), seen by Catholic charity Aid to the Church in Need (ACN, 22 July), claims robberies, kidnappings and murders have all increased in the area. The Diocese of Fada N’Gourma covers 16 parishes: five have been forced to close due to terror attacks, while a further seven have been forced to restrict ministry to the main church because terrorists control the roads. They have also destroyed the telecommunications networks. By April 2022, only 5.5 percent of the villages in the diocese were accessible, leaving priests unable to minister to 95 percent of their flock. ACN reports: ‘In many parts of Fada N’Gourma, Islamist sermons have become common and other religious practices are forbidden, whilst in other areas, Catholic services are permitted, but jihadists enter the chapels to ensure that men and women are seated separately.’

Prayer: May the Lord go out like a mighty man; may he stir up his zeal like a man of war; may he shout and show himself mighty against his foes. May the Lord lead Burkina Faso from the darkness of insecurity to the light of Shalom, from rough places to level ground. AMEN (Based on Isaiah 42:13-16)

-- Australian missionary Dr Ken Elliot (87), abducted on the night of 16 January 2016 from his home near Djibo, Sahel Region, where he and wife Jocelyn had long operated a 120-bed medical clinic,

-- Burkinabe priest Fr Joël Yougbare (45), abducted near Djibo, Sahel Region, on Sunday 17 March 2019 as he returned home from celebrating the Mass, and

-- American Marianite Sister Suellen Tennyson (83), abducted from a convent in Yalgo department (not far from Djibo) in Bam Province, Centre-Nord Region, on 5 April 2022.

Are not two sparrows sold for a penny? And not one of them will fall to the ground apart from your Father. But even the hairs of your head are all numbered. Fear not, therefore; you are of more value than many sparrows (Matthew 10:29-31 ESV).