This month, our meditation has been excerpted from the book entitled Jesus Freaks: Volume 2, compiled by DC Talk and the Voice Of the Martyrs.  In the following passage, a Vietnamese saint remarked about Christian suffering, providing us with fodder for reflection and perhaps application:

You are my friends if you do what I command.  I no longer call you servants, because a servant does not know his master's business.  Instead, I have called you friends, for everything that I learned from my Father I have made known to you. (John 15:14-15)

I was in the central highlands in Vietnam when someone remarked about how the Christians suffer there. One Vietnamese Christian remarked, “Suffering is not the worst thing that can happen to us.”

A moment of consideration: What is the worst thing one could imagine?  This question would probably evoke different thoughts in each of us.  These days, unemployment and loss of income/sustenance would be a worry, loss of freedom another, “climate change” perhaps a close third, disease and pandemics might be a fourth, and world instability a fifth—with an almost endless list of possible worst-case scenarios.  To Christians and/or believers, though, what might be the worst kind of situation imaginable?  Loss of faith in God? Separation from God (aka “sin”)?  Rejection for one’s faith, by society? Suffering for the sake of Christ?  Any source of worst-case images could be called to mind.  Have we ever considered, as the Vietnamese Christian averred, that the worst thing conceivable for us as Christians is not suffering for the Name of Christ, but disobedience to the very Christ we adore and worship and call “Lord”.

Yet Christ countered this feeling, as he said:  “But why do you call Me ‘Lord, Lord,’ and not do the things which I say?  “Whoever comes to Me, and hears My sayings and does them, I will show you whom he is like:  “He is like a man building a house, who dug deep and laid the foundation on the rock.  And when the flood arose, the stream beat vehemently against that house, and could not shake it, for it was founded on the rock.  “But he who heard and did nothing is like a man who built a house on the earth without a foundation, against which the stream beat vehemently; and immediately it fell. And the ruin of that house was great.” (Luke 6:46-49)  We call him Lord, Lord, rather blithely; we sing confidently about “What a friend we have in Jesus” and yet Jesus said, “You are my friends if you do what I command.” (John 15:14)*

Two persons (of many possible) have agreed with the call on Christ’s followers to obey:

1) Dietrich Bonhoeffer (Hung in Nazi Germany in 1945) – Bonhoeffer courageously took a stand to protect Jews against persecution in Nazi Germany, saying, “Christ wills that the weak and persecuted should be rescued, and He must be obeyed.”*  Because of this stand, he could no longer support the German state church.  He helped create a new group called the “Confessing Church” and led an “illegal” seminary.  He eventually became active in the resistance movement, which led to his arrest and execution.

2) Perpetua (Christian living in Carthage in AD 202) had it all:  noble birth, wealth, a fine family, education, intelligence, youth, and beauty.  But none of these things, not even her love for her baby, compared to her love for Jesus.  Obeying His will for her life was her first priority.*  She wrote these words to her family: Do not be ashamed by my death.  I think it is the greatest honor of my life and thank God for calling me to give my life for His sake and in His cause.  He gave the same honor to the holy prophets, His dearly beloved apostles, and His blessed, chosen martyrs.  I have no doubt that I am dying for God’s cause and the cause of truth.

Many Christians receiving mention in Foxe’s Book of Martyrs knew the call of Christ in their lives, to be true until death:

Faith of our fathers, living still,
In spite of dungeon, fire and sword;
O how our hearts beat high with joy
Whenever we hear that glorious Word!

Refrain
Faith of our fathers, holy faith!
We will be true to thee till death.

More love to Thee, oh Lord, more love to Thee…  They may cry that they would be obedient to Christ, unto death.  Perhaps they would even agree that “they loved not their lives even unto death.” (Revelation 12:10-11)  Such were, and are, committed Christians; we are each called to be committed to the Lord, to obey Him, to be obedient to His commands. 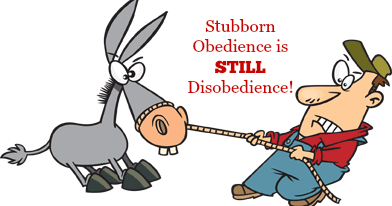 The son who insincerely said he would obey, but didn’t, was disobedient to the command.

In Andrew Murray’s excellent book, The School of Obedience, he wrote a preface which includes these compelling words:

The Father in heaven asks, and requires, and actually expects, that every child of His yield Him whole-hearted and entire obedience, day by day, and all the day. To enable His child to do this, He has made a most abundant and altogether sufficient provision in the promise of the New Covenant, and in the gift of His Son and Spirit. The very entrance into this life demands the vow of absolute obedience, or the surrender of the whole being, to be, think, speak, do, every moment, nothing but what is according to the will of God, and well-pleasing to Him.*

If these things be indeed true, it is not enough to assent to them: we need the Holy Spirit to give us such a vision of their glory and divine power, and the demand they make on our immediate and unconditional submission, that there may be no rest till we accept all that God is willing to do for us.

Let us all pray that God may, by the light of His Spirit, so show His loving and almighty will concerning us, that it may be impossible for us to be disobedient to the heavenly vision.
—Andrew Murray.
Wellington, 9th August, 1898.

What place does disobedience to our Lord have, in our Christian lives?  “Let no one deceive you with empty words, for because of such things God's wrath comes on those who are disobedient.  Therefore do not be partners with them.” (Ephesians 5:6-7) While we may not describe the disobedient thus, Aristotle said that if wicked men do obey at all, “wicked men obey from fear; good men, from love.”  Good men and women who are followers of Jesus Christ, obey Jesus from the wellspring of our love for Him, not out of compulsion or a resentful heart.  Please hear what God’s Word says to us about His commands, and obeying them (in the following selection of Scripture references:

These days, we loudly hear proclaimed in print, on lawn signs, on TV, on Radio, on the internet, that certain lives matter.  That should be said about us as Christians.  Our lives of obedience to our Lord matter.  God seeks committed believers who agree that His commands are to be followed.  Our reward for living such dedicated lives?  A close walk and relationship, with the King of kings, and the Lord of not only lords but of us as well. But His words give us courage:  Isaiah said it—if only the Israelites had obeyed God’s commands…  We have the opportunity to be God’s people, and then our peace will be like a river, and our righteousness like the waves of the sea!  Our lives will be complete.  May we too say, that “Disobedience to God is the worst thing.”