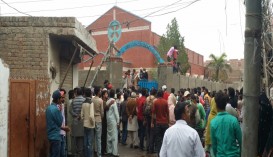 42 Pakistani Christians accused of lynching two Muslim youths in the aftermath of the terror attack on two Youhanabad churches have been acquitted.

The twin suicide bombings killed at least 14 churchgoers and injured several in 2015.

After the attack enraged Christians took to the streets in protest and two Muslim men accused of being involved were lynched by the mob.

But on Wednesday a judge at the anti-terrorism court ordered the release of 42 suspects after the family of the victims and the accused reached an alleged financial settlement.

However, while in custody, the suspects had to endure poor living conditions and abuse, and as a result two Christians, Indrias Masih and Usman Shaukat, died in custody in 2017.

Nasir Saeed, Director CLAAS- UK said: “I am very happy to see the peaceful settlement of the Youhanabad case.

“Although we were hoping for their acquittal much earlier, because of the Pakistani justice system it took much longer than we expected. It is very sad that two members died in prison while the trial was going on.

CLAAS in Pakistan has been providing free legal aid to 45 Christians, and CLAAS’ lawyers have been attending the court hearings.

Mr Saeed said it has been possible because of the concerted efforts of the churches, political leadership and NGOs. He added: “This is a moment of joy for everyone who has been involved in any way.

“Though families have been reunited almost after 5 years, and life looks normal in Youhanabad, the attack on the two churches will always be remembered as a dark day in Pakistan’s history and those who gave their lives to protect the churches and lives of their fellow brothers and sisters will always be remembered as martyrs. The Church already has their photographs on the outside wall.”

Unfortunately, despite several attacks and continued threats the Pakistani government has failed to provide enough security and ensure protection to Christians during worship and most of the churches have made their own security arrangements because Christians still feel under attack.