Have you heard about Iranian Christian Mary Mohammadi?

As part of our increased focus on international religious freedom, in the months to come, FRC will be taking a closer look at the state of global religious freedom and the abuses our Christian sisters and brothers across the world endure. As we pray for our own country, we will also focus on countries and regions where persecution against believers is widespread.

Together, we'll remember those who are suffering greatly for their Christian faith. We will pray for them and, when possible, act on their behalf.

In March, we are focusing on Iran.

As one of the countries hit hardest by the coronavirus (Covid-19), over 17,000 Iranians are infected as the death toll surges past 1,100. Iran's notoriously oppressive regime has struggled to contain the virus, and critics accuse the government of lying about the number of coronavirus cases to hide the extent of the problem.

The authoritarianism that has crippled Iran's ability to respond to the coronavirus triggers oppression throughout Iranian society. And no one knows this better than Iran's religious minorities.

Iran is among the world's worst religious persecutors. Christians who evangelize or convert from a Muslim background are routinely harassed, intimidated, and arrested because of their faith. 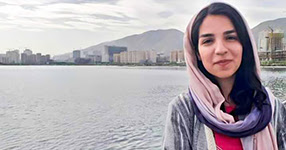 One prominent case is that of 21-year old Mary Mohammadi. Like many converts, Mary has had several confrontations with Iran's authorities.

On January 12, 2020, Mary was arrested during her participation in widespread protests against the regime's downing of a Ukrainian passenger aircraft. For weeks, no one knew where she was. Finally, it was revealed that she was being held in the notorious Qarchak Women's Prison, where she was strip-searched, beaten, and endured abusive interrogations.

It was reported on February 28 that Mary was released on bail, when thousands of other prisoners were being released amid the regime's scrambled efforts to respond to COVID-19. For now, her court hearing has been rescheduled for late April. Meanwhile, Iran has just released inmates en masse from some prisons as the coronavirus rages out of control.

Meanwhile, numerous other Iranian Christians face danger and uncertainty due to their courageous and outspoken faithfulness. Dabrina Bet Tamraz recently shared at FRC about her family's ongoing harassment by the Iranian legal system. Her father, Assyrian Pastor Victor Bet Tamraz, was sentenced in 2017 to ten years in prison for "acting against national security by forming home churches, attending seminars abroad, and proselytizing Zionist Christianity." Dabrina's mother, Shamiram Isavi, was sentenced to five years in prison on similar charges. Both have been released on bail while appealing their cases.

Victims of religious persecution in Iran have reported that imprisoned individuals whose cases get international media attention receive better treatment in prison because authorities know the world is watching. Advocacy has a real-world impact. Please encourage the Trump administration to continue to pressure the Iranian regime to stop imprisoning people simply because of the faith they hold.

Please pray along with us for Mary as she faces her hearing in April, for the Bet Tamraz family, and for Iran's many thousands of courageous Christians. They face ongoing dangers and constant uncertainties about their future in a hostile land. May our Lord protect and empower them!

Stay tuned for the next entry in our series on how to pray for persecuted believers around the world.