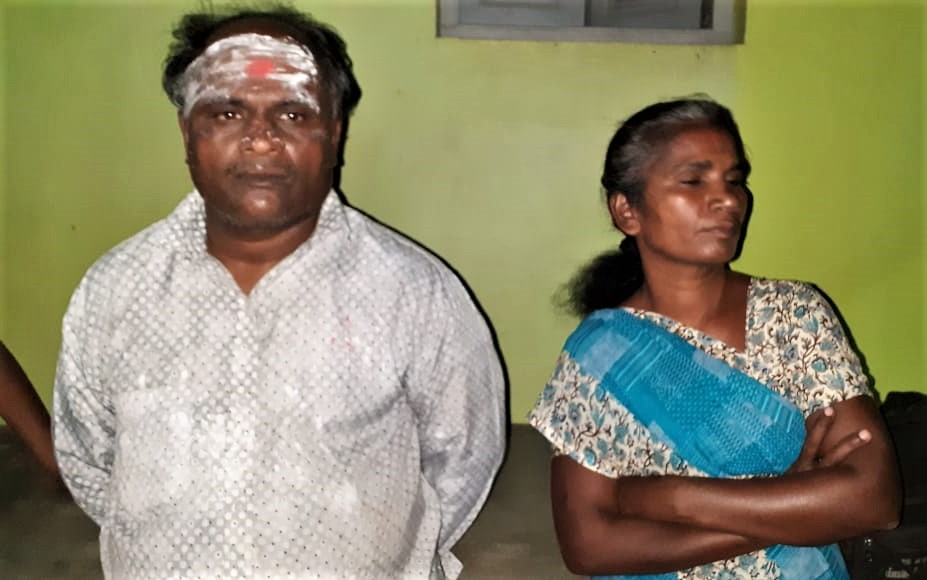 HYDERABAD, India (Morning Star News) – Police in southern India’s Tamil Nadu state rushed to a slum where Christians were providing food and other aid earlier this month and detained them on false charges of forcible conversion, sources said.

Marakkanam police in Viluppuram District humiliated the Christians, including the presbyter of the Viluppuram Church of South India, accusing them in coarse language of trying to fraudulently convert the poor in the guise of providing basic necessities, said the church's pastor, the Rev. Perumal Kanagaraj.

Shortly after Pastor Kanagaraj and about 30 young adults from the church arrived from Viluppuram to the nearby slum area of Anumandai village on March 8, a member of the Hindu Munnani extremist group showed up and began uttering obscenities at them, the church leader said.

“The Hindu Munnani activist soon lost his cool and started beating the youth missionaries while he continued abusing them in extremely foul language,” Pastor Kanagaraj said. “Within no time the crowd started gathering, and he held us up there and was not letting us move.”

When the Christians began to call police, the Hindu nationalist told them he had already filed a police complaint against them, and that he would put them behind bars at any cost, he said.

“We told the person, ‘Brother, you don’t like it that we are coming here. It is fine. We will leave,’” but he threatened us, that if we left from the place we would be burnt alive,” Pastor Kanagaraj told Morning Star News. “He was getting more and more aggressive.”

The Christians were shocked when police arrived and took them into custody, he said.

“They spoke ill about Christianity and slapped us as we stood there in the police station helplessly,” Pastor Kanagaraj said. “We requested that the police not lodge any cases against the [Christian] youths, fearing police cases would affect their careers.”

Marakkanam Inspector of Police Senthil Vinayagam spoke abusively to the Christians, telling them, “Instead of doing this work, send your wives to someone and earn money,’” according to an eyewitness who requested anonymity.

“The inspector was trying hard to incite the youths that they would respond equally aggressively to his words, but by God’s grace we did not fall into it,” Pastor Kanagaraj said.

Police released them with a warning that they should not be seen again attempting to convert people in the area, he said.

Remembering Christ on the Cross
For the past three years the church has provided grains, clothing and flashlights to the area poor, who lack water and other basic services, he said.

“When we met the families during Christmas 2019, they had shared with us that they are unable to survive without food, water and electricity and had requested us to visit them with supplies as often as possible,” Pastor Kanagaraj told Morning Star News.

The pastor’s diocese bishop has sent a letter to the Tamil Nadu chief minister, he said. The parents of some of the Christians in their early 20s were panicked to learn of the incident but were proud that they had not protested, kept calm and returned safely, he added.

“We remembered Jesus on the cross when the Hindu extremists and police were humiliating us using vulgar language, and we did not protest,” Pastor Kanagaraj said.

Forcibly Applying HIndu Symbol
Police misbehavior is one of the main catalysts for hostilities against Christians in Tamil Nadu state, a rights activist said.

The Hindu nationalists forced them sit on the road as the assailants phoned friends, inviting them to join them to publicly disgrace the couple for distributing gospel tracts, Zeba said.

“When their friends also reached the spot, they abused the couple with foul language as they badgered them with questions – ‘Why are you converting Hindus to Christianity?’” Zeba told Morning Star News.

The assailants video-recorded the harassment and circulated it on social media. The video shows one of the assailants asking the names of Phinehas’ parents, and when he replies, “Parvathy,” the extremist leader says it is a Hindu name, that they have converted to Christianity and are defiling Hinduism by working as Christian agents.

“When Phinehas’s wife resisted their attempt to apply the ash and vermillion on her forehead, the Hindu extremists threatened that the female members of the village would attack her with broomsticks,” Zeba said. “Later the police also had refused to take action against assailants. Police behavior is mainly responsible for the hostilities against Christians in Tamil Nadu.”

Nehemiah Christie, Alliance Defending Freedom India’s Tamil Nadu legal-aid coordinator, told Morning Star News that superintendents of police of both Vellore and Viluppuram districts have been informed about harassment of Christians in their jurisdictions.

“It is important that the police take swift and stern action against religious extremists who continue to target Christians” Christie said. “Only this will stop the criminals from continuing their nefarious acts with impunity.”