Fulani militants shot dead three women and a man died of a suspected cardiac arrest during a raid on the Christian Nitiriku village in Kaduna State, Nigeria, on Sunday 19 April.

Ninety-year-old Mrs Titi Saje, Mrs Hannatu Joseph (45) and Awiki Adi (42) were killed in the attack and Mr Sunday David (61) slumped over and died of a suspected heart attack, as the militants launched their assault. 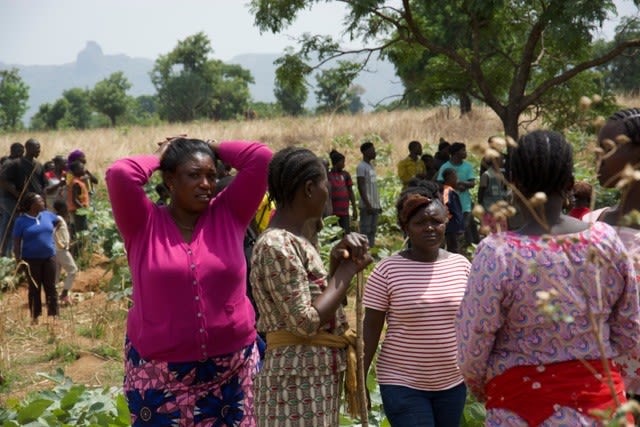 “I feel pain, like fire in my heart,” said Joseph Maza, a 95-year-old villager who lost his daughter and sister-in-law in the brutal attack. The grief-stricken elderly Christian was unable to say any more to the Barnabas contact.

Women evacuate village after the Fulani raid that destroyed many homes

A Fulani militant also killed in the early evening attack was thought to have been caught in the crossfire of his co-assailants.

The militants set 63 houses ablaze, and burnt food stores, motorbikes and water pumping machines used in farm irrigation. “They looted houses, taking away whatever they could including cattle and foodstuff and destroying anything they could not carry,” said village leader, Dauda Rogo.

Rogo, also a retired pastor, described a string of previous attacks on his village. “In 2016, we lost over 37 people and since then they [Fulani militants] have been coming in from time to time killing people silently, one or two here and there in their farms.” He recalled that his son’s farm was taken over by a Fulani man. His son was beaten when he asked for his land to be vacated and, soon after, Fulani militants attacked the village.

“We are not the only farmers here. Muslims also own farms in villages near us, why do they not also take over the farms of their fellow Muslims? This is more than grazing land or farmers and herders’ fight over land. This is specifically targeting Christians,” he said.