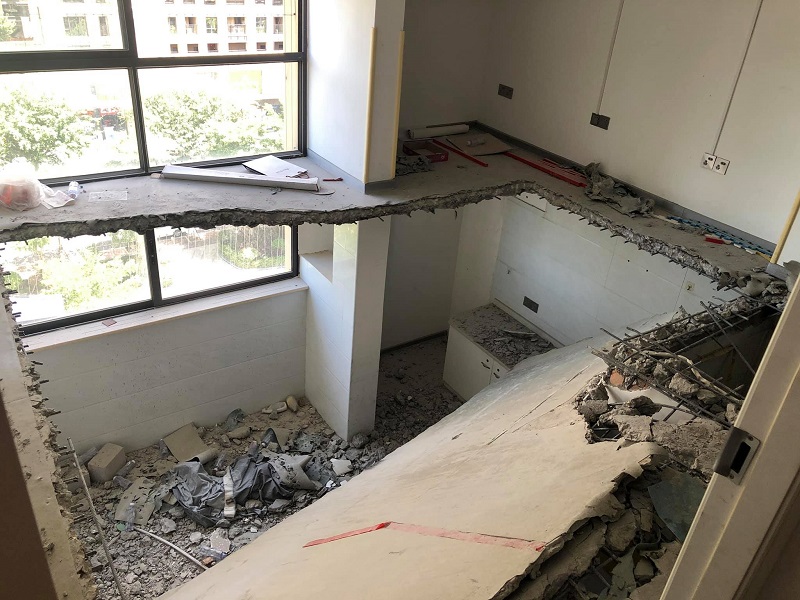 A month after local authorities brought in more than 100 officers from four different agencies to demolish Xingguang Church on June 11, dozens of security guards and officers from the local Ethnic and Religious Bureau returned to demolish the remaining homes within the residential building, where the church also once stood.

In a series of videos shared by preacher Yang Xibo from another highly persecuted church, Xunsiding Church, dozens of chengguan, or Urban Management Law Enforcement officials, were seen marching toward the remaining units that were not taken down during the June operation.

In Yang’s Facebook post, he mentioned that the developer initially sold these units with the selling point that the six-meter tall loft could be divided into two floors, which also received local government’s approval.

“Yet the government and dirty [cops] are barbaric to bypass all the regular administrative law enforcement procedure and forcibly demolish [the homes]. The main reason behind their action is to prevent anybody from gathering here again (although since the last demolition, no one has gathered here),” he continued.

Without proper documentation or notification, the authorities broke into a Christian’s home despite the resident’s resistance. The 67-year-old woman was soon shuffled off by dozens of uniformed chengguan, some equipped with anti-riot shields.

Other Christians at the scene who were trying to intervene were blocked at the stairs and prevented from moving further. When they questioned the authorities why they illegally entered private property and demolished people’s residence, they were met with silence.

The demolition team then destroyed the flooring between the two floors, before removing personal items from the home. A policeman who was called in by the Christians prohibited anyone from recording, claiming that his job was to make sure the demolition proceeded smoothly.

Xingguang Church was first raided on April 19 by government staffers from five different departments, followed by a violent raid on May 3, where many members were injured and some were briefly detained. The church’s preacher, Titus Yu, recently filed a complaint pursuant to China’s Supervision Law against three officials for their abuse of power and illegal intrusion of personal property. No response has been given.

China Aid also reports that on July 7, lawyer Li Guisheng was treated poorly by the Jimei District authorities when he submitted relevant evidence for this case. He had no way of knowing whether or not this case would be accepted or when he can expect a response.

Gina Goh, ICC’s Regional Manager for Southeast Asia, said, “For the Chinese government to frantically persecute Christians even after their churches were shut down shows how Beijing has no interest in respecting religious freedom. What the Chinese Communist Party (CCP) does not understand is that Christianity will not be wiped out just because the buildings no longer stand. The more the government erodes the rights of Chinese citizens, the more enemies it creates within its territories. One day, this pressure cooker will explode, threatening the CCP regime, the exact endgame it is fearful of.”

HOW TO PRAY: Pray for unity for this congregation in the midst of opposition. Pray for the authorities to respect the rights of Christian minorities. Pray for provision for this church as they rebuild.