The remains of a Ghanaian Christian martyred by Islamic State in Libya, murdered alongside 20 Egyptian Christians more than five years ago, were taken to Egypt and finally laid to rest at the end of September.

Before their murders in February 2015, the 21 men were filmed by their captors kneeling in front of black-clothed jihadists, each armed with a knife, on a beach in Sirte, Libya. In the video released by the terrorists, the Christians’ lips were seen moving, several silently, and many were clearly praying “Lord Jesus Christ” in Arabic in their final moments before they were beheaded. 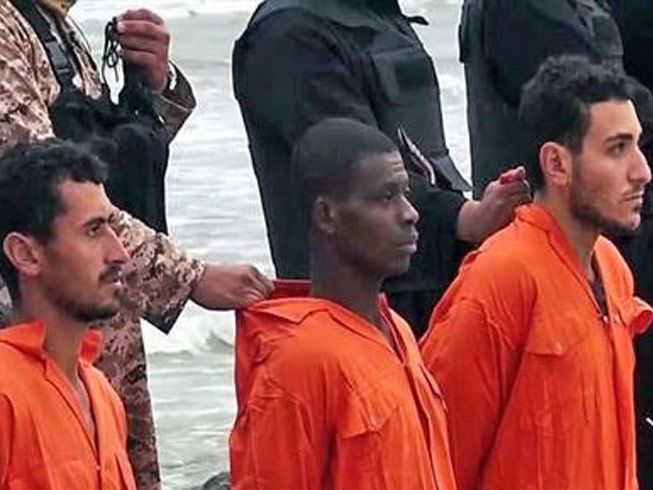 Moments before his death, Ghanaian Christian Matthew Ayariga refused to deny his Saviour Jesus Christ in order to save his life

One of the terrorists asked the Ghanaian man, later identified by his friends as Matthew Ayariga, “Do you reject Christ?” and demanded that he follow Islam. Referring to the Christians next to him, Matthew answered, “Their God is my God,” before he too was pushed face forward on to the sand and beheaded.

The bodies of the 20 Egyptian martyrs were flown to their homeland in May 2018, however, Matthew’s body was unclaimed. In September 2020, authorities in Libya released Matthew’s remains to Egyptian Christians to be laid to rest alongside the other martyrs.

“Our joy is now complete,” said a mother whose two sons were killed alongside Matthew, who had been working in Sirte as a builder.

The murdered men had gone to Libya to find work but were rounded up by Islamic State fighters in Sirte in January 2015, when the group controlled territory there. Jihadi gunmen went door to door, separating the Christians from the Muslim migrant workers, before leading away the Christians.

The bodies of the 21 martyrs were recovered in October 2017 and identified after painstaking forensic examination.