Iran: The High Cost of Discipleship

IRAN: THE HIGH COST OF DISCIPLESHIP

plus: Believing Muslims now a Minority in Iran

On 1 July 2019 Iranian Christian converts Sam Khosravi (36) and his wife, Maryam Falahi (35), were among eight Christians arrested during raids by the Ministry of Intelligence and Security (MOIS) in Iran's Persian Gulf city of Bushehr [RLPB 510 (10 July 2019)]. While Sam's mother (who is 61) was released because of her age, the remaining seven believers (four men and three women) were convicted of spreading 'propaganda against the state', 'collusion', and 'membership of a group hostile to the regime'. On 21 June 2020 the four men were handed custodial sentences of up to one year in prison each. Sam and his brother, Sasan, received one-year jail terms after which they will face work restrictions and be required to serve a further two years in internal exile. The three women were fined and Maryam, who is a nurse, was also banned for life from working in the public sector (including hospitals) [RLPB 557 (8 July 2020)]. The rulings are being appealed.

As if that were not enough, on 19 July 2020 - in a ruling that has only just come to light - the court also ordered that Sam and Maryam's 20-month-old adopted daughter, Lydia, be returned to state care because, as Christians, Sam and Maryam were 'not fit' to raise her. Sam and Maryam adopted Lydia - who has special needs caused by heart and gastrointestinal diseases - from an orphanage in February 2019 when she was just 10 weeks old and have loved and cared for her ever since. Judge Muhammad Hassan Dashti appeared reluctant to hand down the ruling, leaving observers convinced he was acting under pressure from MOIS. In his verdict, Judge Dashti acknowledged that Lydia displayed an 'intense emotional attachment' to her adoptive parents. He lamented that 'considering the health of the child and her illness, there is zero possibility of giving her away to another family. If the child returns [to the orphanage], it is possible that she would be forever under the protection of the Welfare Department'. With evident sympathy he noted that Sam and Maryam adopted Lydia because 'in 13 years of marriage, [they] didn't have a child to bring light and warmth to their home', before submitting that Lydia (deemed Muslim by the state) should never have been placed in their care.

In seeking to overturn the verdict, the couple's lawyer obtained fatwas (religious rulings) from two Grand Ayatollahs. Grand Ayatollah Naser Makarem Shirazi decreed that due to 'necessity' the child may stay in the family and that the adoption is therefore 'permissible'. Grand Ayatollah Yousef Saanei confirmed that the adoption does not violate Iranian law, and decreed that the child's religion should be determined at puberty. Despite this, on 22 September, the appeals court upheld the ruling and ordered that Lydia (now just shy of her second birthday) be removed from Sam and Maryam's care and returned to the orphanage. The case has prompted an outpouring of sympathy. Advocates are appealing for prayer, that the state might relent and allow Sam and Maryam to keep and care for Lydia as their adopted child. This is critically important, not only for Sam, Maryam and Lydia, but for all Iranian Christians with adopted children.

PLEASE PRAY THAT GOD OUR HEAVENLY FATHER WILL

UPDATE to RLPB 564 (26 Aug): Joseph Shahbazian (56, an ethnic Armenian) and Malihe Nazari (46, a Persian convert) were arrested in a Tehran house church on 30 June and imprisoned with bail that was exorbitant, unobtainable and unprecedented. We thank God that both Joseph and Malihe have now been released on reduced bail; their trials are pending. Please pray for all Iranian Christians who are facing charges, or who are in prison and separated from loved ones because of their faith; pray also for courageous lawyers, and that indignation over the lack of freedom would continue to grow.

------------------------------------------------------------
EXTRA: BELIEVING MUSLIMS NOW A MINORITY IN IRAN
Iran's Islamic regime does not allow religious conversions out of Islam. However, while the state is unwilling to recognise conversions, it still punishes converts as infidels and apostates while continuing to count them as Muslims. This is nothing but a grand deception.
According to a new poll by the Group for Analyzing and Measuring Attitudes in Iran (GAMAAN, a secular non-profit institute in the Netherlands), only 32 percent of all Iranians consider themselves to be Shia Muslims! GAMAAN surveyed 50,000 Iranians (90 percent of whom were inside Iran) and found that, while 78 percent still believe in God, around half have rejected their religion, while six percent have converted to another faith, including 1.5 percent who now identify as Christian. On the basis of its research, GAMAAN estimates that at least 750,000 Christians currently reside in the Islamic Republic (twice the previous estimate), while those who identify as Muslim are now a minority. [GAMAAN report, in Persian.] 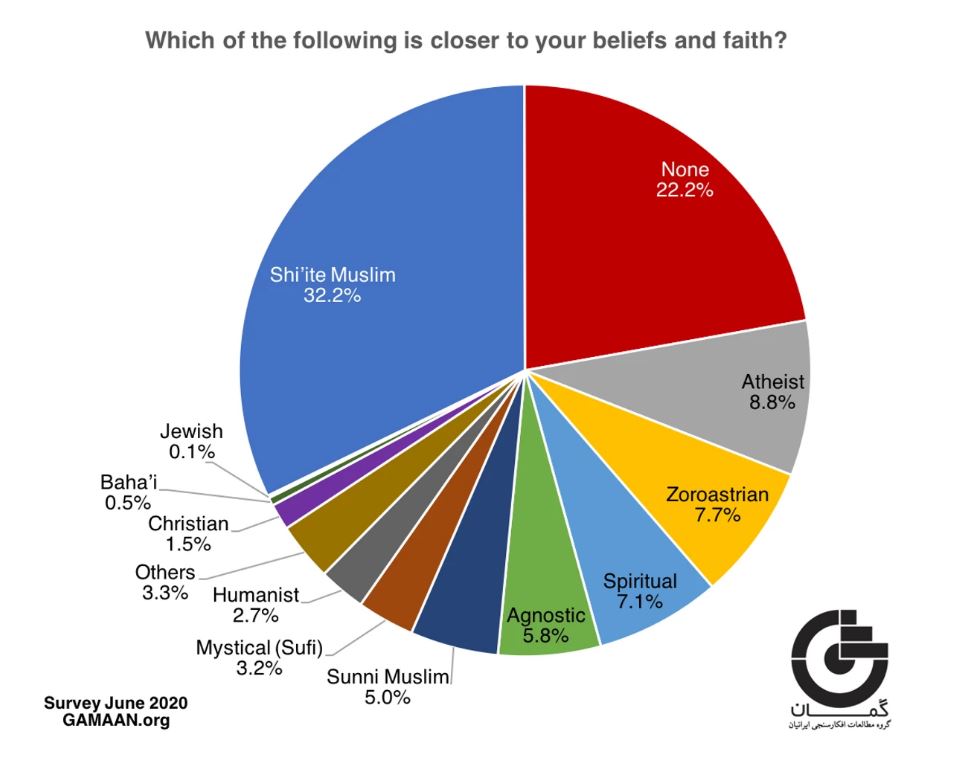