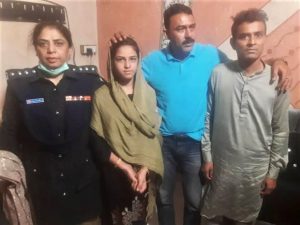 LAHORE, Pakistan (Morning Star News) – A high court in Pakistan on Monday (Nov. 23) ruled that a 13-year-old Catholic girl allegedly abducted and forcibly converted and married to a Muslim man must remain in a government shelter home until she reaches age 18, sources said.

The court failed to return Arzoo Raja of Karachi, Sindh Province to her parents but also declined to dismiss her father’s charges of statutory rape against Ali Azhar, the 44-year-old Muslim accused of abducting her, the family’s attorney said.

“I believe it is a good verdict, because the court has not quashed the FIR [First Information Report] registered by Arzoo’s father, and Section 375(5) for statutory rape of a minor has been added to it, a crime punishable with life imprisonment or death sentence,” attorney Jibran Nasir told Morning Star News. “Arzoo will remain in the shelter home and reconsider her decision to not live with her parents.”

Having ruled on Nov. 9 that Arzoo cannot enter into marriage under the Sindh Child Marriages Restraint Act, the court ordered her to the shelter after she refused to return home and insisted that she had freely chosen to marry Azhar, Nasir said.

“Please understand that Arzoo is reluctant to live with her parents because of the consistent brainwashing done by the accused and certain community activists for ulterior motives,” he said.

Underage girls in Pakistan come under intense pressure to give false court statements from Muslim men who have forcibly converted and married them, including threats to kill them and family members, rights advocates say.

Qayyum Bahadur, a rights activist based in Karachi, said the court seemed to be overlooking the fact that Arzoo is a child who has been traumatized.

“The court should have considered that Arzoo is a minor who has suffered a violent trauma and is under pressure after her kidnapping, forced conversion and marriage to the man who raped her,” Bahadur told Morning Star News.

In some such cases, courts have returned minors to their families, he said. Although the shelter home will take care of Arzoo’s educational needs, she will still be vulnerable to her kidnappers, he said.

“She is easily accessible to Muslim family members of the accused and Islamist clerics, and they will continue to influence her, making it impossible for her to return to her family and Christian faith,” Bahardur said. “The court must entrust her custody to her parents.”

In the Nov. 9 ruling, a Sindh High Court division bench of Justices K.K. Agha and Amjad Ali Sahito stated that when asked whether she wished to go with her parents or return to the shelter home where she has stayed while her case was determined, Arzoo “in essence” replied that she did not want to go to either.

Attorney Nasir, noting that the case was filed primarily by Arzoo’s alleged abductors in her name, said he was pleased that the court not only declined to dismiss her parents’ abduction charge but rejected the alleged kidnappers’ pleas for custody and legal marriage.

He said that the parents’ legal counsel would approach the Supreme Court seeking return of custody of their child. The court ordered the provincial home secretary to assign an officer from the Social Welfare Department to ensure Arzoo’s well-being and spend at least an hour with her every week.

Nasir said that the case marked the first time that action has been taken against an entire network of actors in an underage marriage case.

“From the accused to the witnesses of the marriage, the court has ordered charging them all under the law, which is a good precedent,” he said.

The attorney said he intended to add Section 292-A of the Pakistan Penal Code to the FIR in case Azhar obtains some relief in the rape charges. Section 292-A states that “whoever seduces a child by any means whatsoever with an intent to involve him/her in any sexual activity or exposes him/her to obscene and sexually explicit material, document, film, video or a computer generated image or attempts to do the aforementioned acts, shall be punished with imprisonment of either description for a term which shall not be less than one year and may extend up to seven years or with fine which shall not be less than 100,000 rupees and may extend to 500,000 rupees, or both.”

Although intercourse with a girl below the age of 16 is statutory rape, in most cases a falsified conversion certificate and Islamic marriage certificate influences police to pardon kidnappers.

Regarding the issue of forced conversion, Nasir said the court avoided giving a direct ruling, tacitly giving her an opportunity to reconsider her life choices.

“The Lahore High Court in a ruling in 2019 had stated that ‘since the question of faith was a matter of the heart and one’s conviction, no court can declare a minor’s conversion invalid or void,’” Nasir said, adding that the court indicated that it can only rule on conversion cases as they relate to matters such as inheritance disputes.

After Arzoo’s father, Raja Masih, reported his daughter missing on Oct. 13, police informed him that Azhar had shown them a Nikkahnama, or Islamic marriage certificate, a Sanad-e-Islam or conversion certificate and an affidavit saying she had consented to them of her own free will.

The case has sparked an outcry from the Christian clergy and rights groups.

According to the Peoples Commission for Minorities’ Rights and the Centre for Social Justice, the vast majority of 156 incidents of forced conversions between 2013 and 2019 involved underage girls, some as young as 12 years old. Muslim groups oppose a minimum age for conversion or marriage, claiming that it is not sanctioned by Islam.