The Evangelical Fellowship of India (EFI) recorded 327 instances of discrimination and targeted violence against Christians in India in 2020, including five murders, at least six churches burned or destroyed, and 26 incidents of social boycotting, according to its yearly report, published on January 14..

The EFI acknowledged that the number of incidents recorded in the report was “by no means an exhaustive list.” The EFI noted that during the past year, “Christians, especially in rural areas of several states across the country, were victims of violence, had their congregational prayers disturbed, and places of worship attacked.” Political maneuvering, police impunity and extremist vigilante groups all contributed to the persecution of Christians. 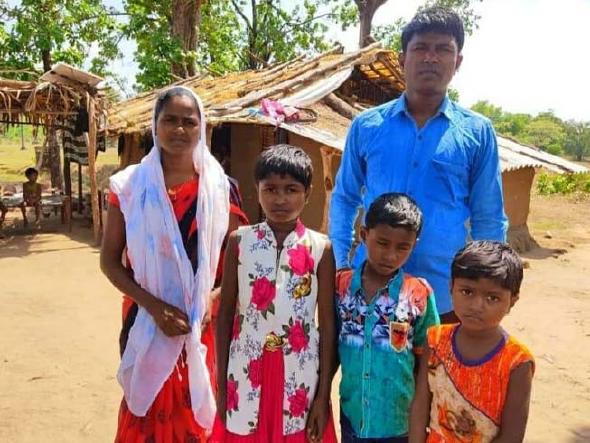 Munshi Dev Tado with his wife and three of his four children. Munshi was murdered on July 10 by Maoist Naxalites after he left the extremist group to begin a Christian ministry.

According to the report, “The most alarming development has been the expansion and scope of the notorious Freedom of Religion Acts, which are commonly known as anti-conversion laws.” Though the laws ostensibly prohibit only religious conversion by force, fraud and allurement, Christians who are actively and lawfully sharing their faith are vulnerable to false accusation, and the laws, in effect, have the potential to criminalise all conversions. At least 66 Christians were falsely accused or arrested in 2020.

Uttar Pradesh became the eighth state in India to enforce an anti-conversion law, with the passing of the “Prohibition of Unlawful Conversion of Religion Ordinance” in November 2020. The law was used by members of Vishwa Hindu Parishad (VHP), a hardline Hindu group, in January 2021 to accuse five Christians of trying to “unlawfully” convert people to Christianity.

Uttar Pradesh was also the region where Christians were targeted most, with 95 incidents of discrimination and targeted violence recorded in 2020. This was followed by Chhattisgarh with 55 incidents, and Jharkhand and Madhya Pradesh with 28 and 25 respectively.

The highest number of incidents across the country was recorded in March during the countrywide lockdown at the height of the Covid crisis, including a Christian prayer hall being set on March 13 by religious extremists in Dasmantpur Block, Koraput district, Odisha.

A Christian woman was raped and murdered on May 29 in Kumud village, Kondagaon district in Chhattisgarh, having previously been publicly threatened four times to renounce her faith. Her body was found mutilated next to a bundle of firewood in a nearby forest.

In Bari village, Khunti district, Jharkhand state, on June 8, a Christian, Kande Munda, was stabbed to death by a group of at least six religious radicals. On July 19, in the same district, a Christian woman, Suman Munda, was killed as she attempted to protect her daughter from sexual assault.

Pastor Munshi Devu Tado was murdered by Maoist Naxalists on July 10 in Bhatpar village, Gadchiroli district, Maharashtra. The armed Naxalists tied the pastor’s hands behind his back with rope, took him outside and shot him, leaving his body in a pool of blood. The pastor was a former member of the militant communist Naxalite group and participated in the persecution of Christians. However, after he converted to Christianity, he left the Naxalites and began Christian ministry, opening a church on his own land.

Rev. Vijayesh Lal, the General Secretary of the EFI, appealed to both national and state governments in India, asking them to “ensure the rule of law and the security of religious minorities in India.” He continued, “We especially appeal to the State Governments of Uttar Pradesh, Chhattisgarh, Jharkhand and Madhya Pradesh to deal stringently with the various right-wing organizations operating in these states, whose primary agenda is to create an atmosphere of fear among the Christian community and other religious minorities.”