The Easter season provides the perfect paradigm for strategic intercessory prayer for the persecuted Church. Intercessors bury themselves in the suffering of God's people precisely so they might fight for them in prayer. However, though our prayers involve lament and more often than not tears, we do not pray as those who have no hope! Precisely because God has promised, Christ has risen and the Holy Spirit has come, we can be assured that the horror of persecution and the agony of what seems like divine silence, will ultimately be overtaken by joy and praise as God's purposes unfold and his promises are fulfilled. In Jesus Christ all the promises of God are 'Yes'; which is why we can say 'Amen' (so be it) (2 Corinthians 1:20) to prayers prayed in hopeful anticipation and then watch for the answer with great expectation.

In the morning, Lord, you hear my voice; in the morning I lay my requests before you and wait expectantly (NIV) / watch (ESV) / keep watch (Hebrew: sapa) (Psalm 5:3).

All four devotions from Easter 2020: Prayer Fuel from the Servant Songs of Isaiah (pdf)

* BURMA (MYANMAR), where Christians are imperilled [RLPB 587 (3 March)] now the Tatmadaw (Burmese military) - which has raped, killed, displaced, plundered and terrorised Christians for decades - has seized power in a military coup and where a 'Christian Crisis Looms' [RLPB 590 (24 March)] as the front-line moves outwards, from the Burman-dominated centre to the ethnic minority periphery. In the east, the Karen (including Karenni) are around 40 percent Christian, while in the north and west the Kachin and Chin are predominantly Christian. Burma's Christians are mostly Baptist, the legacy of American Baptist pioneer missionary Adoniram Judson (1788-1850).

ON THE GROUND: At 6am on Thursday 25 March, anti-coup protesters were preparing sandbags in Hpa-an (the capital of Burma's eastern Karen/Kayin State) when security forces swept in and cleared the streets using stun grenades, rubber bullets and live ammunition. Two young male Karen were shot and seriously wounded. Military violence was also unleashed in Taunggyi (the capital of Shan State, also in the east) and in Mawlamyine (the capital of Mon State, in the southeast). On Sunday 28 March more than 100 people were killed as the Tatmadaw moved to put down protests in several cities across the country, including Hpakant, the jade-mining hub in Kachin State (in the north). An ethnic Chin woman, Ah Khu (38) - a leader of civil society group 'Women for Justice' - was killed in the north-western Sagaing Region. 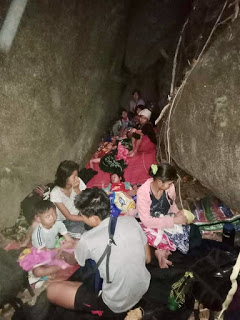 FROM THE SKY: On Saturday morning 27 March, the Karen National Liberation Army (KNLA) seized control of a hilltop outpost formerly held by the Tatmadaw, killing 10 and capturing eight Burmese soldiers in the process. That afternoon, Karen villagers in Papun District noticed Burmese military aircraft encircling overhead. The first reprisal came at between 8:20 and 8:30pm when four bombs were dropped on the Day Pu No village area, just seven miles from the border with Thailand. This was followed by a second bombardment between 1am and 2am. Free Burma Rangers reports that three villagers were killed and six wounded, and that more than 2500 have fled their homes and are now hiding in the jungle. A civilian was also killed by an artillery shell in a punitive attack against the Kachin Independence Army (KIA) in Hpakant, Kachin State, after KIA troops seized control of several strategic outposts. Ongoing aerial bombardment in Karen State has forced more than 12,000 people to flee their homes and hide in the jungle. Please pray.

* ALGERIA [RLPB 588 (10 March)], a fragile state within which rages an intense spiritual battle. On 21 January poultry farmer Hamid (43) - a Christian convert, married with four young children - was tried for blasphemy because of a cartoon he naively re-posted some three years earlier. For this, Hamid was handed the maximum punishment of five years in prison. On 27 February Pastor Rachid Seighir and Nouh Hamimi were convicted in absentia of 'proselytising'. Both were fined and sentenced to two years in prison.

UPDATE: On 22 March an appeals court in Oran upheld Hamid's five-year sentence. His lawyer, Farid Khemisti had expected the sentence would be greatly reduced. 'I expected at the worst, six months in prison,' he said. Khemisti is weighing-up whether to appeal to a court of cassation or to the supreme court. He is convinced Hamid only received the maximum penalty because he is a convert to Christianity. Please pray. Meanwhile, Pastor Rachid Seighir and Nouh Hamimi (who managed Pastor Seighir's Christian bookshop in Oran) will have their appeals heard on Sunday 18 April. Please pray.

Azerbaijan held massive military drills from 15 to 18 March with the stated aim of preparing Azeri troops to wage war in mountainous wooded areas. In response, Armenia staged its own military drills from 16 to 20 March. The escalation comes a mere month after Turkey and Azerbaijan held massive joint military exercises near the city of Kars in eastern Anatolia, close to the border with Armenia. During that time, Azerbaijan's President Ilham Aliyev accused Armenia of 'obstructing the creation of the Zankezur corridor', adding, 'they will not succeed; we will force them'. Aliyev also claimed that 'Zankezur' - the Azeri name for Armenia's southernmost province of Syunik - is 'a historic territory of Azerbaijan'. Aliyev's claim has raised alarm in Armenia. Furthermore, the Russia-brokered agreement signed on 9 November 2020 makes no mention of a 'corridor' through Syunik. [The term 'corridor' implies a degree of sovereignty.] It states only that Armenia will guarantee the safety of transport and the unimpeded movement of Azeri citizens between the Republic of Azerbaijan and the Nakhchivan Autonomous Republic. Armenians suspect Aliyev is looking for a pretext to go to war over Syunik. Please pray.

NOTE: Back in 2012, Stratfor Worldview explained (while using the Azeri name for the Armenian province!) the strategic importance of 'Zangezur' (i.e. Syunik): 'Whoever controls the Zangezur Corridor can project power into the Turkish sphere of influence in Anatolia, the Russian sphere of influence in the intra-Caucasus and directly into the Persian core territories... Although Turkey, Russia and Iran have not paid much attention to the Zangezur Corridor in recent years, they are certain to revisit the Zangezur issue in time.' Armenians fear that time may have arrived.

On Sunday 28 March, a newly married young couple rode their motorbike to the entrance gates of Makassar’s Sacred Heart of Jesus Cathedral. When the church security guard declined to let them through, they detonated their explosives, killing themselves and wounding at least 20 church officials and members, many critically. According to Cathedral pastor, Wilhelmus Tulak, it was 10:30am, the Palm Sunday worship service had just finished, and people were mingling outside when the explosion occurred. Police arrive to find shrapnel and body parts strewn across the church compound and street. President Widodo immediately instructed the police to increase security at churches over the Easter season. Police suspect the bombers were members of Islamic State-aligned Jamaah Ansharut Daulah (JAD). Please pray.

Western Christians sometimes complain about all the various rosters they are required to be on in order to keep their church running smoothly: morning tea, welcoming, cleaning, lawn mowing, maintenance, technical etc. Before ever complaining again, we should all give a thought to Christians in Indonesia, Egypt, Pakistan, Iraq, Nigeria and elsewhere, who must contemplate having their name on the security roster that will require them to stand guard at the gate. The guard does not have to bake or sweep or put on a smile or push a mower through wet grass. He does however need to be prepared to tackle a suicide bomber or gunman to the ground, and in doing so, courageously and selflessly give his life that his Christian brothers and sisters might live. Please pray that God would foil every evil plot to bring terror and grief to churches this Easter. May God bless and protect every father, husband and son serving on a church security roster this Easter season.

Christian converts Homayoun Zhaveh (62) and his wife Sara Ahmadi (42) have been summoned to begin their prison sentences for belonging to a house church. The couple were first arrested in June 2019. They were imprisoned initially in Sari, near Amol on the Caspian Sea coast, where they were holidaying with friends, and then in Evin Prison in Tehran. Homayoun was released after a month, but because Sara is alleged to have a leadership role, she was held for 67 days (includes 33 days in solitary confinement) during which time she was subjected to severe psychological abuse. In November 2020 Homayoun was sentenced to two years' prison for house church membership, while Sara was sentenced to 11 years due to her alleged leadership role. On 30 December Sara's prison term was reduced to eight years in prison on appeal. The couple received the summons on 19 March and were given just days to report to the prison. Grave concerns are held for Homayoun's health, for he suffers from advanced Parkinson's disease which, apart from anything else, will render him exceedingly vulnerable to COVID-19 in prison. Expressing dismay and indignation that a house church could be construed as an 'illegal organisation', their lawyer has requested a retrial. Please pray.

Christian charity Open Doors (OD) reported on 15 March that Kazakh authorities with the Astana city police have charged the 400-member Shanyrak Church with insulting the feelings of Muslims, after individual members allegedly made negative comments about the Muslim community. As the pastor notes: 'This is a very serious charge with difficult, big consequences ... Our goal is to preach the gospel of Jesus Christ without blaming or judging others. Today, we were called by the police and city hall. It is not yet clear [when] it will all end. The worst possible scenario is that the church will be closed, and several people may be jailed. Now a lawyer is helping us in this process.' Please pray.

On Monday 22 March Sri Lanka's multi-faith International Religious Freedom Round-table sent a letter to Prime Minister Mahinda Rajapaksa, urging him to abandon the planned introduction of anti-conversion legislation. Signed by 36 religious dignitaries, the letter affirms the fundamental human right of freedom of conscience on matters of faith and religion, while denouncing unethical conversion through force and violence. It also points out that anti-conversion laws are notoriously ambiguous, giving emboldened intolerant elements a weapon they can use against religious minorities for doing nothing other than worshipping together, sharing their faith, or performing charitable works. According to the Ministry of Buddhasasana, Religious, and Cultural Affairs, which is drafting the legislation, complaints are on the rise, especially against 'Born Again Christians'. The Church has grounds to be alarmed. In February 2020 PM Mahinda Rajapaksa signalled his intention to revisit the issue of anti-conversion legislation when he identified the conversion of 'traditional Buddhist families to other religions' as one of the greatest 'threats facing the Sinhala Buddhist Nation' [see RLPB 544, 'Easter Devotion and Prayer for Sri Lanka,' (8 April 2020)]. Please pray.