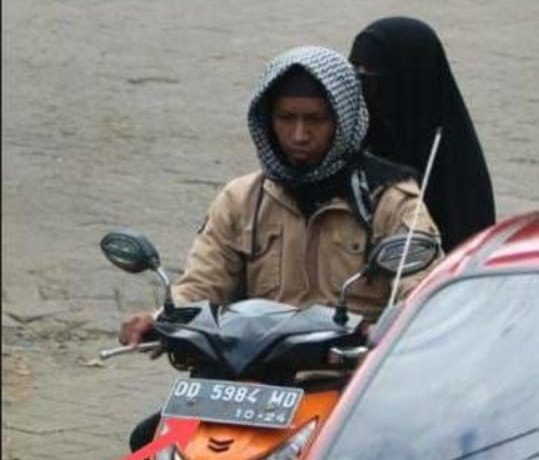 Indonesia Suicide Bomber Couple. The Wife was Pregnant at the Time of the Attack.

Indonesia (International Christian Concern) – More details start to emerge after the suicide bomb attack against a Catholic Cathedral in Makassar yesterday shocked the nation of Indonesia.

Responding to the inquiry on how the couple made the pressure cooker bomb, the head of the Indonesian National Counter-Terrorism Agency (BNPT) Commissioner General Boy Rafli Amar, said, “There is information related to online training on social media developed by them. So they developed the procedure for making explosives, and were in touch with some senior sources who were trained abroad.”

The couple, identified only with their initials as L and YSF by the authorities, regularly attended a JAD study group named Villa Mutiara, where each member takes turn to teach doctrine, plan for jihad, and get involved in buying materials and tools for suicide bombings.

According to the couple’s neighbor, Nuraini, the wife was four-month pregnant at the time of the attack. Listyo also said in today’s press conference that “L had left a will to his parents saying that he is bidding them goodbye and was ready to be martyred.” The police chief added that following the bombing yesterday, the police arrested four people who belonged to the same study group as the suspects. Four more people in Jakarta and Bekasi, on the outskirts of the capital, were also arrested. The operation uncovered five potential bombs as well as ingredients to make bombs.

A church pastor from Makassar told ICC that despite the presence of evil, “There were a few miracles from God before and during the attack,” he said, pointing to the capture of 26 terrorists last month by the police. Among them, some were ready to blow themselves up.

Things could have been much worse if they were not arrested.

Also, given the powerful blast that shattered the windows and glasses from a nearby hotel and cars, it was a miracle that all the victims stay alive, while the terrorist couple turned into human remains.

The second Mass also ended ten minutes earlier than usual in preparation for the third Mass. If it were to end on time, the attack could have caused more casualties from the dispersing congregation. As of Monday afternoon, among the 20 wounded victims, 15 people remained in hospital and the rest discharged. ICC will continue to follow up on the updates of this attack.

HOW TO PRAY: Praise the Lord that incidents such as these have been caught early and terrorists have been arrested before they could commit their crimes. Pray boldly that extremists would turn from their ways and seek saving grace in Christ.