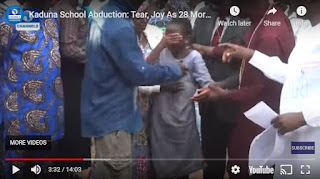 Mercy Joy is reunited with her father.
Channels TV, 25 July 2021

1) ABDUCTIONS: A few children were released because they were sickly or because ransom was paid. Three boys who escaped on the night of 20 July were subsequently picked up by police and reunited with their parents after undergoing a medical examination. In the early hours of Sunday 25 July, 28 students were collected from the Tsoho Gaya Forest in Chikun Local Government Area, after being released during the night. The Nigerian Baptist Convention has confirmed that 87 schoolchildren aged between 10 and 19 years are still with the bandits. While the government and the Church refuse to pay ransoms, the distraught families had pooled resources in the hope of collectively redeeming the children. Video footage from Nigeria's Channels TV shows clearly traumatised children - some wounded - being reunited with their parents, followed by scenes of parents in deep distress as they realise their nightmare is not yet over. Please pray.

Prayer for Nigeria: Psalm 56, excerpts, When I am afraid, I put my trust in you (v3). You have kept count of my tossings; put my tears in your bottle. Are they not in your book? (v8) This I know, that God is for me (v9c). 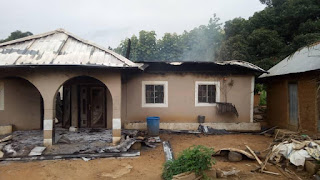 2) ZERO SECURITY: As reported by Morning Star News, for the whole week, from 8 to 14 July, Fulani herdsmen attacked Christian communities in southern Kaduna state unimpeded. They targeted villages throughout Zangon-Kataf LGA, killing at least 33 Christians and burning 215 homes and four churches. The jihadists swept through this very same area 12 months ago [see RLPB 561, Christian Crisis in Kaduna, 5 Aug 2020]. This campaign of terror is designed to effect ethnic cleansing. According to the International Organisation for Peace Building and Social Justice (PSJ, 14 July), '108 Southern Kaduna communities have been displaced and taken over by [Fulani herdsmen] since 2019'. The main reason why there is zero security is that military-influenced 1999 constitution centralises the police force and prohibits states from establishing their own police force [see RLPB 596 (5 May 2021)]. Please pray for the Christians in Nigeria's North and Middle Belt and for constitutional reform.

3) TAKING JIHAD TO A WHOLE NEW LEVEL: On Sunday 18 July, in an incident that has sent shock-waves through Nigerian security, jihadists in the north-western state of Zamfara, shot down a Nigerian Air Force Alpha jet above the Zamfara-Kaduna state border. The pilot ejected safely. This is the first confirmed case of an armed gang downing a Nigerian jet. Boko Haram has claimed responsibility. This takes the jihad to a whole new level.

* CHINA [RLPB 606 (14 July)], where Taiyuan's Xuncheng Reformed Church, a church planted by Chendu's Early Rain Covenant Church, is experiencing escalating persecution. Officials ordered the church to be closed in November 2020, and detained its pastor, An Yankui, for 15 days during January 2021. On 7 July, Pastor An's friend and co-worker Zhao Wikai (35) was summoned and then detained on the very serious charge of 'illegal holding of materials promoting terrorism and extremism'. 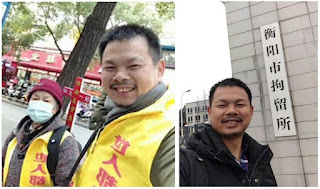 2) 'CLERGY': Update to RLPB 585, 'CCP Moves to Fully Subjugate the Church,' 17 Feb 2021. The Administrative Measures for Clergy, which came into force on 1 May, require citizens involved in religious work to secure a Clergy Card proving they have CCP permission to conduct their ministry. As RLPB 585 noted: 'One evangelist destined to fall foul of the new Administrative Measures is Brother Chen Wensheng of Hunan Province. Before he met the Lord Jesus, Chen spent ten years crippled by and enslaved to his drug addiction. His testimony is one of transformation, healing, liberty and redemption, all thanks to the Lord's amazing grace.' A fearless evangelist, Brother Chen was arrested on 19 June 2021 and 'disappeared' into Residential Surveillance at a Designated Location (RSDL: see RLPB 593, 'Residential Surveillance at a Designated Location,' 12 April). Chen was interrogated and warned not to continue his street preaching before being released on 7 July. Chen is not going to stop witnessing, meaning the arrests will continue with ever increasing pressure. Please pray for Brother Chen, and for the Church in China.

* THE SAHEL [RLPB 606 (21 July)] where French troops are being withdrawn at a time when jihadists are: (1) escalating activity to record levels; (2) enforcing Sharia law and implementing Sharia penalties in territories they control; and (3) actively working to expand south into Ivory Coast, Ghana, Togo and Benin. Christians in the Sahel - especially those in the Mali, Burkina Faso, Niger tri-border region - are imminently imperilled.

UPDATE: Despite being majority Muslim, the Sahelian states have a proud tradition of religious freedom and social cohesion. Christian mission - comprising churches, schools, medical clinics, aid centres and development projects - has a respected presence there. That could change if Islamic powers fill the vacuum left by France and the West. A report entitled 'Turkey in the Sahel', just released by Crisis Group (27 July), provides details of Turkey's expanded presence and influence in the Sahel where it is building mosques, schools and hospitals, and presenting itself as 'an alternative security partner'. Please pray.

According to a local Christian correspondent inside Burma, the junta is restricting oxygen supplies, giving it only to people who hold a letter of approval from a hospital owned and run by the junta. The claim is supported by a report in Asia Times entitled 'Everyone is Dying', by Associate Professor Mary P Callahan (17 July). Reporting from Thailand, Callahan confirms that, instead of tackling the health crisis, the military junta is using COVID-19 as a weapon. 'Most horrifically,' she writes, 'there is no oxygen left in the country, or rather, there is oxygen, but only the military gets it.' She warns: 'One very reputable public health specialist expects that the population will be decimated by at least 10-15 million by the time COVID is done with Myanmar.' The Irrawaddy reports (27 July) that the junta is even seizing oxygen imported by charities. According to the local Christian source: 'More than 200 Christian ministers across the nation have gone to be with the Lord... The people of Myanmar and believers in Myanmar desperately need God's healing touch and protection from this deadly COVID-19 disease. Kindly continue to uphold us in your prayer.' Please pray.

* CUBA: ARE WE ALL COUNTER-REVOLUTIONARIES NOW?

Protests erupted across Cuba on 11 July. Though triggered by despair over a lack of food and medicines amidst the COVID crisis, they evolved quickly into angry demonstrations of unprecedented scale against the ruling Communist regime. Among the hundreds of citizens arrested on 11 July were Berean Baptist pastors Yarian Sierra Madrigal and Yéremi Blanco Ramírez, both tutors at the William Carey Biblical Seminary in Matanzas. The pastors were detained incommunicado and in appalling conditions before being released on 24 July. During that time, Pastor Madrigal's wife and young son were forcibly evicted from their rented home; the family is currently sheltering in a church. Meanwhile, another pastor, Lorenzo Rosales Fajardo, remains detained, incommunicado, in a State Security facility in Santiago de Cuba. His 17-year-old son arrested with him has since been released unharmed but deeply shaken.

In February 2019 Cuban Christians overwhelmingly voted against constitutional amendments set to strengthen socialism, restrict religious liberty and pave the way for same-sex marriage. For championing this minority view, the Church was vilified, labelled 'counter-revolutionary' and subjected to increased persecution [RLPB 491 (27 Feb 2019)]. On 7 July 2021 - just four days before the protests erupted - Cuban Christians held a nationwide and interdenominational day of prayer and fasting for Cuba. Today this 'extremely vibrant Church' is standing with the protesters who are all counter-revolutionaries now! May God redeem this crisis to raise the profile of the Church in Cuba and open many hearts to receive the Gospel. Please pray.

Islamic violence has claimed over 200 lives and wounded close to 1000 in France in recent years. Consequently, on Friday 23 July, the French Parliament passed a bill designed to help the state counter the influence of inherently political fundamentalist Islam. The Law Reinforcing Respect for the Principles of the Republic will allegedly protect laïcité, which traditionally has been understood as state neutrality with regards to religion (or separation of Church and state) but increasingly is understood by many as the elimination of religion from the public sphere. The law empowers the state to interfere extensively in the practice of religion if it finds that a group is inciting violence or hatred, a charge open to interpretation and abuse. Concerns abound that hostile anti-Christian groups will take up the law as a weapon against the Church. Furthermore, the law requires that parents who home-school their children obtain authorisation from the government to ensure that children are taught France's secular values (many of which are contrary to Biblical values). An office of laïcité has been established to track the implementation of the law. Protestant leaders told Christianity Today (April 2021) that the Church will continue her Gospel witness and the fight for liberty without fear or weakness. 'The Lord is with us,' confirms Erwan Cloarec (Evangelical Baptists), 'and he invites us to faith, trust and prayer.' Please pray for the Church in France.

Christian child, Nayab Gill (13) before her
abduction and forced marriage to Muslim.

On 14 July Supreme Court Justice Mushir Alam rejected an appeal by Bishop Azad Marshall, Moderator Bishop of the Church of Pakistan and president of the National Council of Churches in Pakistan (NCCP). Filed by renowned human rights lawyer Saif Ul Malook on behalf of Marshall, the appeal called for a constitutional petition to protect Christian girls from forced conversion and forced marriage. It also asked the court to recognise the difference between Pakistani penal laws and Islamic Sharia law, as the latter is one of the major causes behind the exploitation of Christian girls. The petition was filed under Article 184(3) of the Constitution of Pakistan, which allows the Supreme Court to have jurisdiction over matters of public importance with reference to the enforcement of any of the fundamental rights guaranteed by the Constitution of Pakistan. Justice Alam rejected the petition on the grounds that it did not address an individual case or grievance. But as Bishop Marshall explained to Morning Star News (MSN, 20 July), 'The matter is not restricted to an individual case. Rather, it relates to the entire Christian population in Pakistan and the violation of their fundamental rights.'

While Bishop Marshal was extremely disappointed to have his appeal rejected, he was encouraged by the court's promise 'that it will take this issue up if we bring a specific case before it'. He told MSN that he will file an appeal in the Supreme Court against the Lahore High Court's 1 July decision to ignore official birth records and send the Christian child Nayab Gill (13, abducted in May) to live with her Muslim abductor, Saddam Hayat (30), a married father of four. In making his ruling the Lahore High Court judge cited Islamic Sharia Law which says a girl who has had a menstrual cycle is of marriageable age. Please pray for Nayab Gill, and that Bishop Marshall's new Supreme Court petition will be heard.

On 5 July Uzbekistan's President Shavkat Mirziyoyev signed Uzbekistan's new Religion Law. The law was made public and came into force on 6 July. The US Commission on International Religious Freedom laments: 'Uzbekistan's new Religion Law fails to address the most serious restrictions on religious freedom in the country... [but] retains Uzbekistan's most severe limitations on freedom of religion or belief from previous laws, including restrictions on education, literature, and sharing of religious beliefs.' In a detailed analysis, Forum 18 (5 July) also laments the law's numerous failings, including its ban on all exercise of freedom of religion and belief without state permission, its ban on teaching about religion without state permission, its ban on sharing beliefs and its compulsory prior state censorship of all printed and electronic religious materials. Meanwhile, Turkey's state-run Anadolu Agency praised the new law which it claimed, 'expands religious freedom in the country'. Islamist, neo-Ottoman Turkey - which is expanding its influence into and through Central Asia - was particularly pleased to see many anti-Islamist measures revoked. Please pray for the Church in Uzbekistan.