Four Christian families were beaten and evicted from their village of Ladamila in the district of Kandhamal, Odisha, India, because they had converted to Christianity.

When they tried to return, the Christians found their homes burned down, and they were informed that because they had become Christians, they were no longer allowed to live in the village.

On September 19, several Christian women were prevented from drawing water from the main well. The women instead filled their containers at the paddy field. In response, a group of villagers attacked the Christians in their homes, ransacking the houses and discarding the water they had collected, making it impossible for them to cook or wash. 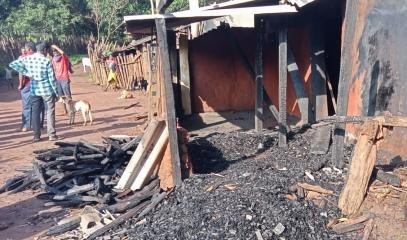 Four Christian families’ homes were destroyed as they were driven out of their village in Odisha state [Image credit: AsiaNews]

Measures to deprive Christians of communal water sources are not uncommon in India, a Barnabas contact confirms. It is a typical first response by the community to new believers or a growing group of Christians to prevent them from using even bore wells supplied by the government.

Two families found refuge with relatives in a neighboring village. The other two families fled to the forest. On September 21, on their attempted return to the village, they discovered that their homes had been destroyed.

John Barwa, a Christian leader in Odisha, commented, “It is very painful and also shameful that nothing is stopping the aggression and harassment of the Christians. It is inhuman behavior. What can you say about people who deny their own villagers water to drink?”

The incident carries echoes of a similar expulsion of Christians in Odisha. In April, eight Christian families were driven out of the village of Sikapai, Rayagada district, by extremists who destroyed their homes.