The population of Africa, currently 1.2 billion, could reach nearly 2.5 billion by the year 2050.

If these projections are accurate, then Africans will then represent more than a quarter of the world’s overall population (projected by 2050 to be 9.5 billion).

Nigeria alone could grow to 400 million people, overtaking the United States as the world’s third-largest country behind India and China. 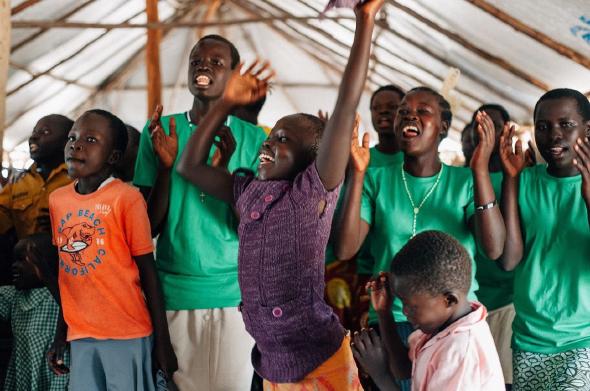 Young Christians worshipping in Uganda. By 2060 it is predicted that nearly half of the world’s Christians will live in sub-Saharan Africa

By 2060, it is thought that nearly half (42%) of the world’s Christians – hundreds of millions of our brothers and sisters – will live in sub-Saharan Africa.

Population growth is also projected to lead to a massive increase in the number of African Muslims. By 2060 it is projected that more Muslims will live in sub-Saharan Africa than in the Middle East and North Africa combined.

Edward Paice – author of Youthquake: Why African Demography Should Matter to the World (2021) and Director of the London-based Africa Research Institute – argues that these demographic changes must lead to a re-assessment of Africa’s significance to the world.

Africa’s ongoing food crisis – severely affecting Madagascar, Zimbabwe and Namibia among many other African countries – could become far more acute if there are twice as many mouths to feed.

A report from the South Africa-based Institute for Security Studies (ISS) in September 2021 predicted that increased hunger and food insecurity could lead to further social unrest, instability and violence across Africa.

Africa already suffers greatly from Islamist extremism. The ISS estimates that in the 20 years prior to the 9/11 attack in the U.S. 10,000 people were killed by jihadi violence across Africa. In the 20 years since that attack the figure stands at 55,000 – more than five times as many.

The sheer youthfulness of Africa – by 2050 it is projected that nearly half of the population will be under the age of 25 – raises questions about the development and training of Church leaders.

Churches and Christian communities across Africa require much practical aid and prayerful support.