The persecution of ethnic-minority Christians by the Myanmar military (Tatmadaw) has been likened to the genocide perpetrated against the Rohingya.

The Tatmadaw’s brutal violence against the Muslim-majority Rohingya was recognized as genocide by the U.S. Government in March 2022.

According to the 2022 report of the U.S. Commission on International Religious Freedom, released on April 25, the treatment of Myanmar’s Christian minority since the military coup of February 2021 is comparable. 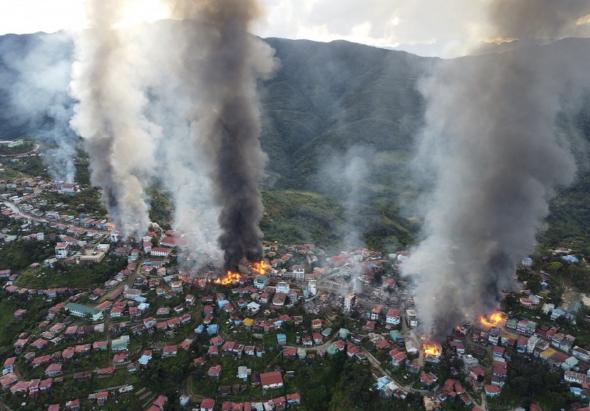 The military represents the dominant cultural identity of Burman (or Bamar) Buddhist. Myanmar is around 68% Bamar and 88% Buddhist.

“The Tatmadaw,” states the report, “has closely associated itself with Buddhist nationalism to promote its legitimacy.”

For decades the Tatmadaw have persecuted Myanmar’s small Christian community, estimated at 6.2% of the population, both for their religion and their ethnicity. Most Christians belong to the Chin, Kachin and Karen ethnic groups.

Violent attacks against Chin, Kachin and Karen Christians – as well as believers in Shan and Kayah states where there is also a large Christian population – have increased since the February 2021 coup.

In December 2021 the Tatmadaw were accused of shooting and burning at least 35 civilians in a Christian area of Kayah State. In January 2022 ten civilians, including a 13-year-old boy, were killed in Chin State.

In September 2021 a pastor was shot dead as he tried to put out a fire by soldiers attacking Thantlang township, also in Chin State. At least five church buildings and 450 houses were subsequently burned down.

Pray for the Lord’s help for all His people in Myanmar who face continued violence. Ask that any genocidal intent towards Christians or other religious and ethnic minorities in that country will be thwarted. Pray for Buddhist extremists, filled with hate, that their hearts will be changed through the ongoing witness of Myanmar’s believers to the saving power of Christ.